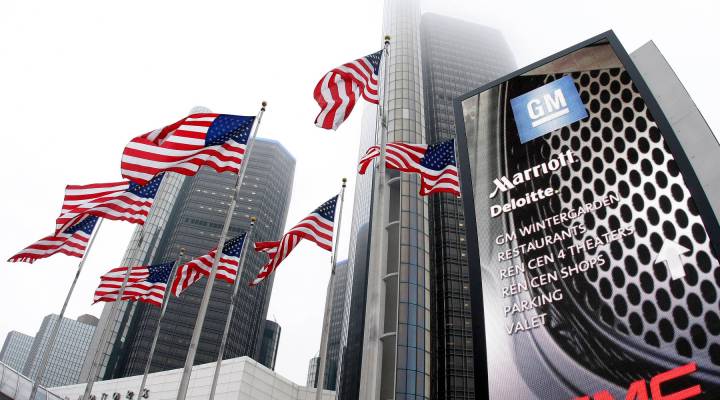 Kai Ryssdal: Wisconsin Gov. Scott Walker is still Gov. Walker today. He fended off a recall challenge last night, and in the process pushed back pretty hard against organized labor. That was the root cause of the recall, Walker’s eventually successful effort to limit collective bargaining rights for public sector workers as a way to control spending.

States, of course, aren’t the only ones that see labor as a place to cut costs. Companies do it all the time. There are layoffs and buyouts all the time. We’re starting to see companies offering retirees buyouts because pension costs are too high.

Stacey Vanek Smith: When it comes retired workers, General Motors is on the hook for $134 billion. That’s the biggest pension obligation of any U.S. company. The buyout plan will cut that by about 20 percent.

Wharton professor Kent Smetters says the buyout is expensive in the short run.

Kent Smetters: The advantage is that they get more certainty.

Certainty that pension plans stop weighing on profits. Company pensions are chronically under-funded and when the economy’s bad, it’s harder to find cash to fill the gap.

John Barry: We’re pretty close to the worst point we’ve been at since we’ve been measuring this.

John Barry is a partner at Mercer consulting firm, which just completed a pension study. Turns out, in May, company pension funds in the U.S. were nearly half a trillion dollars short.

Barry: These are big plans they’ve got a lot of work cut out for them over the next few years to deal with these deficits.

Barry says other companies are likely to follow GM and Ford’s example and offer buyouts. What does that mean for workers?

Zvi Bodie teaches finance and investing at Boston University. He says unlike the companies, retirees will take on more risk and have to manage their retirement money themselves.

Bodie: At Boston University, we currently have, literally over 100 different investment choices. I teach the subject of investments and I wouldn’t be able to readily solve the problem of what to select.

GM is offering financial counseling to retirees affected by the change.