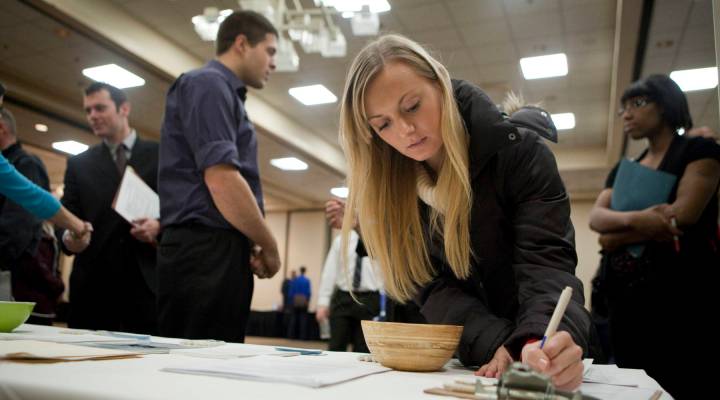 COPY
An applicant fills out a form as she looks for a job at a job fair in Portland, Oregon. Natalie Behring/Stringer/Getty Images

An applicant fills out a form as she looks for a job at a job fair in Portland, Oregon. Natalie Behring/Stringer/Getty Images
Listen Now

Stacey Vanek Smith: Earlier this morning, the Labor Department released the jobs report for may. The U.S. added 69,000 jobs, economists had been expecting more like 158,000 jobs. And the unemployment rate in the U.S. climbed to 8.2 percent, from 8.1 percent in April. At the same time, the number of jobs created in March and April was revised down.

Vanek Smith: So Chris, these numbers look pretty bleak. What do you make of them?

Low: Yeah, okay, so on the surface, absolutely, it was an ugly report and it’s worth mentioning again, with those revisions, the average job growth in the last three months was actually less than 100,000 a month. So, that’s the bad news. The rise in the unemployment rate also. But the good news is that maybe, just maybe, what we’re seeing is a seasonal anomaly with the numbers. This is a theory by the way that’s not just me, the Bureau of Labor Statistics think so too where job growth in the winter is overstated; in the Spring, it’s understated and the reason is that the economy is changed. We just don’t have nearly as much construction activity as we used to have in prior cycles. And so, we’re seeing a soft patch, just like last Spring, just like the spring before. The good news is, it’s a little bit less soft than it was the last two years.

Vanek Smith: Well Chris, if there was a seasonal element to these numbers, let’s take a broader look at the economy. So, in general, where do you see things right now?

Low: Well, GDP growth last quarter was 1.9 percent after revision and in the last year, it was two percent and the year before that it was two percent and I think that’s sort of where we’re stuck. We’re growing at about two percent which is not great compared to prior cycles — it’s pretty weak. But it does mean we have the best growth of any major economy in the world right now.

Vanek Smith: Speaking about the world, we’ve gotten a lot of bad economic news out of Europe and out of China — growth seems to be slowing there more quickly than expected. What does that mean for the U.S.?

Low: Well, there’s no question what we’re looking at is a global recession. Now normally when there’s a global recession, it starts in the U.S., it spreads to the rest of the world. The last time it started somewhere else was the recession of 1998 and shockingly, no one expected it but the U.S. economy actually accelerated because commodity prices fell including gasoline and food. The cost of labor came down, consumer goods got cheaper and we picked up. I think the same thing could very well happen this time. The biggest risk would be the banking system but our banks are also in the best shape they have been in five years.

Vanek Smith: Chris Low, I’m going to have to stop you right there. Thank you.