Bison may be named the national mammal

Bison may be named the national mammal

Kai Ryssdal: OK, here you go. Political gridlock in Washington is over. No, not an agreement on taxing or spending or the national debt or education or immigration or health care.

No, it’s the bison, and a pitch to make it America’s national mammal. Marketplace’s Adriene Hill reports.

Adriene Hill: Sure bison are big, but who knew they were so powerful?

John Calvelli: What’s really exciting about bison, is that it turns out it’s one of those issues that really brings our country together.

John Calvelli is with the Wildlife Conservation Society. His group is part of a coalition working to get the bison elevated to the status of “national mammal” by pushing a Senate bill that’s got sponsors on both sides of the aisle.

Calvelli: This is really a conversation about symbolism and do we believe the bison should be a symbol for our nation.

The bill won’t cost anything. It simply names the bison the national mammal. And why do it? Other than to give the bison a little respect?

Bison have a good tale to tell. Robert Brown is a professor of wildlife conservation at NC State University.

Robert Brown: Bison are somewhat of a success story. They were saved when there were 500 or so left.

Now there are herds of these things, a lot being raised for meat. And what would making bison the national mammal do for ranchers?

Larry Higgins: Time will tell. Some people may feel different about eating a national mammal.

Larry Higgns raises bison in Colorado. He guesses that if bison gets the nation mammal prize, it’ll be a good thing, as we’ll spend a little more time thinking about bison.

Higgins: Well, they can be a little ornery at times. 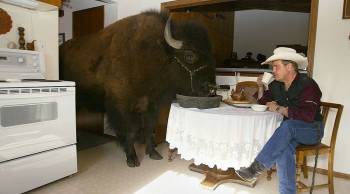 Buffalos, not humans, are the national mammal of the United States