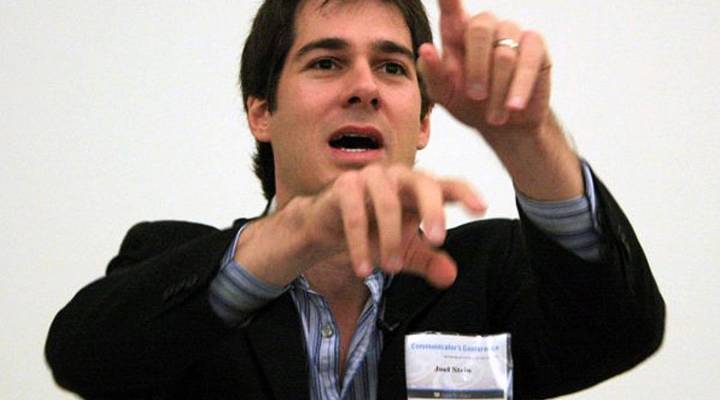 Joel Stein on manliness and money

COPY
From joining the Marines to fighting a UFC champion, author Joel Stein took on the crucibles of masculinity and came away with some interesting personal finance insights. Courtesy of Joel Stein

Joel Stein on manliness and money

From joining the Marines to fighting a UFC champion, author Joel Stein took on the crucibles of masculinity and came away with some interesting personal finance insights. Courtesy of Joel Stein
Listen Now

Tess Vigeland: It’s the official start of the summer. And so, that means maybe an adventure or two in the next couple of months. Or to quote author Joel Stein, “a quest.” Stein went on a quest recently — a quest for his manliness. His “manjourney,” as he dubbed it, saw him enroll in a three-day Marine boot camp, work as an L.A. firefighter for a day, and even get in the ring with a UFC Hall of Famer. Stein documents those adventures in his new book: “Man Made: A Stupid Quest for Masculinity.” Welcome to the show.

Joel Stein: Thank you. I’m really excited about this.

Vigeland: Talk to me about manliness and money. Do manly men handle money differently?

Stein: I mostly dealt with this very ancient, Scotch-Irish, Southern version of masculinity. You know, the hunting, fighting, camping. But I did one chapter where I did the blue-state version of masculinity, which I got a day trader to give me $100,000 of his money and let me trade it for the day, which was amazing. Yeah, day trading is not what I thought it would be at all. I thought you did what you and I would do if buying a stock, like find out what the company does, see who their CEO does, and maybe look at their P&E. Yeah, no. No. They only hold these stocks for a few seconds, so it’s just like poker. They’re just looking at the psychology at the other people buying it and trying to guess whether it’s going to go up or down in those few seconds. I don’t recommend day trading. Although I…

Vigeland: But did it make you more manly.

Stein: It did make me more manly.

Stein: It’s all about risk taking. A lot of manliness is about confidence and there’s a lot of risk taking ’cause you’re gambling, well in my case, someone else’s money. But he was sitting right next to me, so that’s still a lot of pressure.

Vigeland: But back to the question of whether manly men handle money differently.

Vigeland: Did any of these experiences change what you’re doing?

Stein: Well, the problem with manly men is they should not be allowed to touch money.

Stein: Oh yes. Yes, they should immediately hand over all their money to any women in their life. For sure.

Vigeland: What does that tell us about Wall Street then?

Stein: Oh, Wall Street is a mess. You don’t want your money involved in Wall Street.

Vigeland: Because they’re all manly men?

Stein: You know, if you could distance yourself from the manly men and let them duke it out, and just get the gains from their fighting — like with an index fund — then you’re way ahead because you’re just exploiting their fight. But you don’t want to get involved with their fight — all downside.

Vigeland: I don’t know. I’ve been to Wall Street and I don’t find them terribly manly.

Stein: Well they’re manly in a certain kind of way. Right? They’re not manly in a construction worker kind of way. They’re the ugly side of masculinity. The problem with manliness is there’s two versions. There’s the construction and the destruction. So the most manly movie is “Bridge on the River Kwai.” The only manlier movie than “The Bridge on the River Kwai” would be ‘Two Bridges on the River Kwai,’ because you get to destroy two bridges and then rebuild two bridges. I watch my son do it with Legos all day long.

Stein: Yeah. At first it was just destroy. He’d make me build things and then he’d destroy them. I felt I was teaching him how to be a terrorist. But now he’s into the building and then destroying, so it’s a big step up in manliness.

Vigeland: Well speaking of your son, the entire book really does boil down to I think a message for him. You deal with competition, male bonding, surviving the outdoors, so how about we create another chapter. What message do you want him to take away about money?

Stein: I’m very conservative with my money. It’s what my dad taught me. My dad’s a really good investor and he spent a lot of time boring the crap out of me with how to invest, but it sunk in. Like I know how to do it now. I meet people who don’t and it’s shocking. I can’t believe Money Magazine comes out every month. It’s like you can tell people once and they get it, but people don’t and so it’s really a way of thinking and living. I’m going to teach my son that, but I’m going to teach him how to be a little more aggressive than I am. That’s what I learned from the day trader — that if you understand risk, you can incorporate it into your life a little better. Although I don’t own any bonds right now and I’m 40. So that’s kind of pushing…

Vigeland: That’s risky, but you would encourage your son to do this?

Stein: I would encourage my son to go bond-less.

Stein: Bond-less, yeah. And just risk it all. I think that’s a manlier way to invest.

Vigeland: Joel Stein, thanks for coming in.

Stein: Thanks for having me.