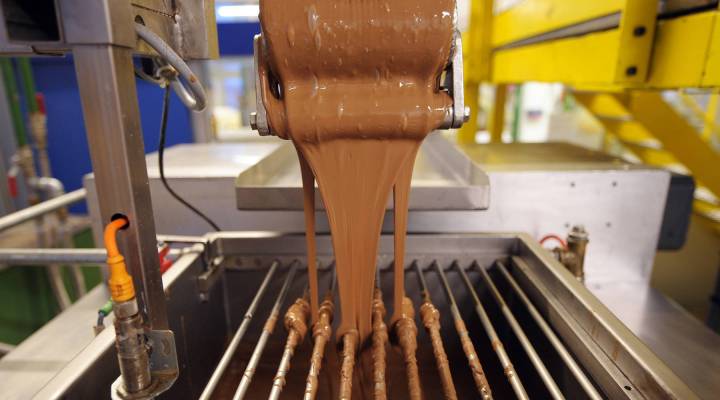 COPY
A chocolate factory in Strasbourg, France. This week observant-Jews have flocked to Trader Joe's to buy out their last stock of kosher chocolate chips. Frederick Florin/Getty Images
Mid-day Update

A chocolate factory in Strasbourg, France. This week observant-Jews have flocked to Trader Joe's to buy out their last stock of kosher chocolate chips. Frederick Florin/Getty Images
Listen Now

Very cheap natural gas is cutting into the amount of greenhouse gases the U.S. is putting into the atmosphere. The Financial Times reports International Energy Agency numbers showing energy-related carbon dioxide emissions are down 450 million tons in five years as coal fired power plants switch to natural gas. Critics point out that natural gas production, including hydraulic fracturing can cause other environmental problems. Also, China and India’s carbon dioxide emissions are way up.

At Trader Joe’s there’s been a run on chocolate chips. Apparently, the company that makes a popular brand of kosher chocolate chips changed the way it cleans its equipment and now can no longer say the chips are dairy free. As a result Jews who keep Kosher and love cookies raced to Trader Joe’s to stock up on the old packages. The New York Post headline? “Chips Ahoy Vey”.

The term is “crowd-sourcing,” and by one definition it means getting lots of people to do something for free instead of paying for a few people to do it. Today’s example: a Singapore based startup called Viki. It gets rights to TV shows-say — a South Korean soap opera — and via the internet gets the world to contribute free subtitle translations. The company’s founder it’s a way of liberating the 90 percent of content that gets tripped within boarders. A Korean soap opera that was a flop in its home market was apparently topping the charts on Viki where now “Playful Kiss” is subtitled in more than 50 languages.

Reports are out this morning that the main newspaper in New Orleans, the Times-Picayune, will be making massive staff cuts and even cutting back on its daily printing schedule.

Fizzling out: a shortage of carbon dioxide hits U.K. food and drink industry