Past presidential elections through campaign posters

Past presidential elections through campaign posters

Kai Ryssdal: The Romney and Obama campaigns are pretty much in flat-out general election mode now. Head-to-head for all the marbles. With television, attack ads providing the soundtrack. Back in simpler times — way simpler times, to some degree — campaigning was quieter. Not so much electronic as paper-based. Campaign posters were the political advertisements of choice.

Ralph Eubanks: Good to be here.

Ryssdal: Where did this idea come from to put all these posters together because I’ll tell you it’s a great little read here. It’s fun, fun history.

Eubanks: The library does all of its publishing in cooperation with trade publishers and Quirk Books approached us with the idea of doing a book of presidential campaign posters and it was one of those things I thought we couldn’t say no to. It’s really fun to go through them and see how all of these images and how selling the presidency has changed over time and in some ways how it’s stayed the same.

Ryssdal: Well right, exactly. Turn with me then, if you would, to 1868. The race between Ulysses Grant for the Republicans and somebody named Horatio Seymour for the Democrats, lost to history Mr. Seymour was.

Ryssdal: And this is the first one I could find that has an explicitly economic theme. You’ve got Ulysses Grant and his Vice President Henry Wilson standing in what looks like a woodshop or something under “The Working Man’s Banner.” Clearly this is “We are the working men and we are going to fix this country after the Civil War.”

Eubanks: Well that’s a theme that really does kind of permeate the book. If it’s not the working man it’s the common man. Earlier it was using the symbol of the log cabin.

Eubanks: The other one that I think is really interesting is the one of James Garfield in the field separating the wheat from the chaff and looking at those huge arms of his.

Ryssdal: Oh yeah. It’s the 1880 race. But it’s Garfield as you said in the field with a scythe and he is nothing but heroic looking in this thing.

Ryssdal: Very buff, yeah. Incredibly buff. It’s very “I am one of you.”

Eubanks: That’s very much the point of that poster, I think, is showing how he wasn’t beyond getting out in the fields and doing some real work.

Ryssdal: Which is actually funny because that’s the last thing you think of presidents today doing.

Eubanks: That is indeed the last thing that you think about. And yet I think even going up to the 1968 Nixon poster — towering in the background is Wilt Chamberlain.

Ryssdal: Right. Go figure out that one out.

Ryssdal: So here’s the… This is the “shoot this interview in the foot” question. Why are we talking about campaign posters today because with Twitter and social media and television and YouTube and the web, there are posters, but do they have the same impact?

Eubanks: The idea of the campaign poster was to present an idealized image of the candidate. That changed when television came into the picture. You look at the poster of Kennedy in 1960 and Johnson in ‘4, they’re almost identical.

Eubanks: Television was playing a much bigger role. I guess it was a really kind of branding of the candidate rather than a real message. I don’t think you see a really good campaign poster again until 2008.

Ryssdal: Right. And that, of course, is the “Hope” poster. It’s Obama and Shepard Fairey. It wasn’t even done by the campaign. It’s this guy who took this AP picture and turned it into what has become really sort of iconic actually for the 2008 election.

Eubanks: It is the perfect campaign poster. It takes an image of the candidate, idealizes the candidate and then places an idea about that candidate in one word into the public’s mind.

Ryssdal: Ralph Eubanks is the director of publishing at the Library of Congress. The book is called “Presidential Campaign Posters.” Mr. Eubanks, thanks a lot for your time.

Eubanks: Thanks very much for having me here. 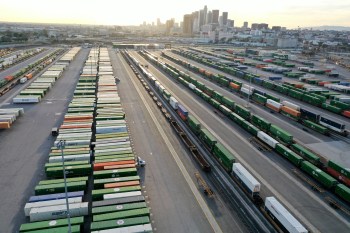