Kai Ryssdal: Facebook’s IPO at $38 means there are thousands of new paper millionaries and a couple new billionaires roaming Silicon Valley today. Maybe they’re not quite as rich as they’d hoped, but there’s probably still some Ferrari shopping going on. Or maybe not. Because a lot of the nouveau tech riche came of age during the last boom, and they’re looking for a different return on their investment.

Queena Kim: First things first, Facebook aside, Silicon Valley isn’t nearly as rich now as it was in during the last tech boom in the late 1990s. Back then Internet stocks were flying so high, just about everyone was throwing money at anything with a dot-com in its name.

Walter Roth is the CEO of Inward.me, a start-up that creates mobile apps that inspire.

Walter Roth: I experienced the tail end of the dot-com and had raised about $9 million.

Did you catch that? He said “the dot-com.” You hear that shorthand a lot from younger entrepreneurs. For them, the last boom has become an historical event — with all the lessons of history.

Roth: I think whether you succeeded or failed in the dot-com, both hit you like a truck. And if you made tons of money, there was a lot of personal issues that come with that. And if you cratered there’s a lot of identity issues as well.

Justin Moore is the CEO of Axient, a start-up in Mountain View. At 31, he’s on his third tech company and like a lot of today’s entrepreneurs, he came of age during the dot-com. At Stanford.

Justin Moore: I show up on campus. I’m hearing about people starting companies out of their dorm rooms, day trading and it’s a whole new world.

So Moore drained his $5,000 in savings and started day trading.

Moore: And it went only one direction, which was up. So, I bought a Porsche Turbo — very excited, all my friends couldn’t wait to drive it and after a week I reached this pinnacle and it was totally empty.

So this time around the thing to have isn’t “things,” but passion and purpose.

Moore: You know, I don’t start my companies to make money. Now, money is important. But it really has to be about the sense of a greater purpose.

Robert Hendershot: You have the Occupy movements, you have all the talk about the top 1 percent.

Robert Hendershot is a professor at the business school at Santa Clara University.

Hendershot: And so people don’t necessarily want to be associated with the extremely wealthy and you can hear it in the dialogue. It’s about changing the world, it’s about I’m not just in it for the money — I want to do good.

Kim: And do you buy it that it is about changing the world or that is it about me?

Hendershott: Well it’s always about me, right? People being modest is what is being respected today.

Welcome to Wisdom 2.0. — a three-day conference where employees from Facebook, eBay, Zynga and Google talk about how to foster wisdom and courage, all in the service of work.

Chade-Meng Tan: In the Valley, we like to think we’re doing good and doing well at the same time.

Chade-Meng Tan — or Meng as he’s known — was an early engineer at Google and he’s also the author of “Search Inside Yourself.” His goal is to bring world peace by promoting enlightenment in business.

Kim: Do you see anybody doing this?

Kim: When you mention Google, obviously it’s been in the news a lot lately because there’s been things that people feel aren’t so good.

Tan: Well yes, but the issue is the company is big and diverse, so there are people at varying stages of “consciousness.”

Hilary Martin is a wealth advisor in Silicon Valley. And she sees many of these tech entrepreneurs when they become “conscious” of being rich.

Hilary Martin: I hear them really talking about how technology changes the world and they’d really like to be a part of that.

And they do it by becoming angel investors and funding start-ups in their infancy. Martin warns her idealistic clients that “being an angel” is high risk. They tell her: it’s not about the money, it’s about being part of something. But Justin Moore, you know the guy who bought the Porsche, says maybe it’s not so much naivete as a return to something else.

Moore: If you look back, yes there was ostentation, but there were also a lot of titans of technology that were started long before the dot-com. Look at the original Silicon Valley entrepreneurs Bill and Dave from HP.

That’s Bill Hewlett and Dave Packard, who started their legendary computer company in a garage in 1938 with a few hundred dollars. And it took them nearly 20 years to go public. 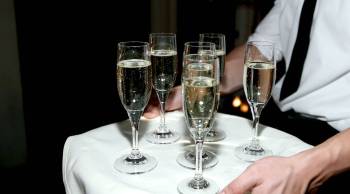