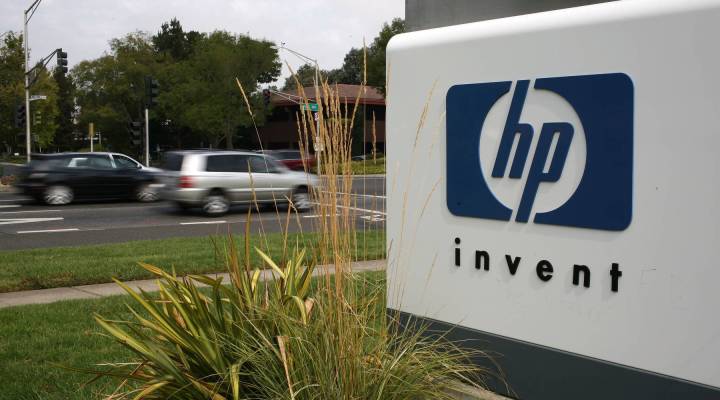 Hewlett-Packard reportedly will lay off 30,000

COPY
The entrance to the Hewlett-Packard headquarters in Palo Alto, Calif. Hewlett-Packard reportedly will announce it is laying off nearly one out of every 10 employees, as Meg Whitman tries to transform one-time pioneer. Justin Sullivan/Getty Images

Hewlett-Packard reportedly will lay off 30,000

The entrance to the Hewlett-Packard headquarters in Palo Alto, Calif. Hewlett-Packard reportedly will announce it is laying off nearly one out of every 10 employees, as Meg Whitman tries to transform one-time pioneer. Justin Sullivan/Getty Images
Listen Now

Kai Ryssdal: Not far from Facebook’s headquarters in Menlo Park, Calif. — literally five or six miles down the road — another Silicon Valley company made some news this week.

Hewlett-Packard is set to announce massive layoffs sometime next week. Thirty thousand people is the number that’s being used. CEO Meg Whitman will reportedly use the savings to create new products and beef up HP’s sales force.

Stacey Vanek Smith: Hewlett-Packard might be struggling a little now, but they have a lot going for them, says analyst Mark Fabbi with Gartner Inc.

Also probably number one in CEO turnover. HP has had three CEOs in three years. Fabbi says that instability has taken a big toll on the company.

Fabbi: The way that I often sum up HP is that they’re less than the sum of their parts. The businesses aren’t working closely together and leveraging the collective assets.

In other words, HP doesn’t even know how much has going for it.

“Swingers” clip: You’re so money and you don’t even know it. That’s what I keep trying to tell him.

That’s from the movie “Swingers,” where two guys are trying to pump each other up. So what makes HP so money? For one thing, its lab. Tech analyst Tim Bajarin says he hopes of the money saved in these layoffs will finally be funneled into innovation.

Tim Bajarin: They actually have one of the richest labs in the world for technology and it has been totally underfunded.

More positive reinforcement for HP? All of the servers it makes are perfect for helping companies get up to speed in the current tidal wave of consumer data.

Michael Holt is a senior equity analyst with Morningstar.

Holt says their success will depend on whether they can focus and leverage their strengths.