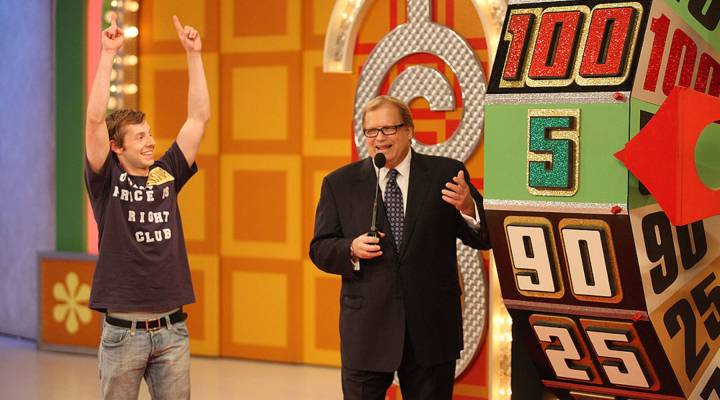 COPY
Host Drew Carey speaks during a segment of 'The Price Is Right' in Los Angeles. Frederick M. Brown/Getty Images

Tess Vigeland: Now, we are not big fans of playing the lottery — or any other game of chance, for that matter. But that doesn’t mean we don’t sometimes daydream of a big win. On the megamillions, maybe, or on a one-armed bandit in Vegas. Or perhaps, like me, you’ve imagined yourself on Final Jeopardy. Risking it all. And basking in the glory of game show championship.

If it does, then come to L.A. and join the ranks of serial game show contestants. People who’ve made a pastime and a decent paycheck out of game show appearances.

Blits: What do you do at Target?

Janet: I should know.

The chance to get plucked out of a crowd for a shot at the Showcase Showdown draws 600 people a day to “The Price Is Right” at CBS Television City here in Los Angeles.

But if you think the plucking is random? Meet Stan Blits.

Blits: Hi Stephanie. How are you darling? Where are you from my dear?

Blits: Hey listen, what do you do in La Puente?

Blits is the show’s contestant coordinator, has been for the past 30-plus years. Each day he makes his way down the line of screaming humanity that is the contestant pool and interviews each and every one of them. It takes about 15 seconds. And in that moment, he is their best friend.

Blits: Most of the people who show up to a game show are not energetic enough to maintain it for television. I’m looking for people with energy first, sincerity and I’m looking for potential comedy. But the thing is we pick 90-year-olds on the show that are obviously not screamers or yellers, but sometimes they’ll say, “I’m gonna marry Drew Carey when I get up there on that stage!” You know, that kind of thing? That’s the kind of energy and sincerity that I think is really fun.

So there is a method to the madness. And Patricia Sanders says she has it figured out. We found her in “The Price Is Right” line. She’s from Inglewood, Calif. She was hoping to win a car. Which would be a modest victory, given what she’s already won elsewhere.

Vigeland: You won a house?!

Sanders: A house, so it was really great.

Vigeland: So is this something that you do regularly?

Sanders: I love puzzles. My mom actually started us on it. She went on “Let’s Make a Deal.”

She knew her chances of winning were…

And that is the hope that springs eternal in contestants like her. But unfortunately the odds weren’t with her that day. She was not asked to…

George Gray: Come on down!!!

But she will no doubt pop up somewhere else on the dial. And you could also keep an eye out for Eric Mueller.

Mueller’s been on five game shows over the past 10 years, started in 2002 with “Pyramid.” A couple of years ago, he was on “Deal or No Deal.” And in between, some that didn’t attain quite the same popularity.

Host: The largest T-Rex skeleton ever discovered turned up in what Sioux reservation state?

Mueller: OK, so this is a game called “That’s the Question,” which was sort of a scrambled word game/trivia game, and this was here at the end game, after I won the beginning of the show.

Host: …the national newspaper was dubbed…

Mueller’s now become a known quantity. And that’s because casting directors are not just used on movies, they are also employed by game shows. So if you’re ever dreamed of appearing on one of these shows — maybe even winning — here’s what the agents are looking for: Character, personality.

Mueller’s got it and he sees it in others during auditions.

Mueller: I do see the same people at auditions over and over again. And when you do a game show, you become best friends with the casting person. You know, people watch these game shows and they say, “How can I get on ’em?” Find out who does the casting and talk to them. This is the person who’s job, 100 percent at the game show is to bring in big players. So they’re always looking for good people.

Bev Pomerantz: I always tell my contestants, “Be to the top, but not over the top.

And if you’re out and about here in L.A., don’t be surprised if she taps you on the shoulder in an unexpected location.

Pomerantz: To be perfectly honest, I would say 95 percent of my contestants are people I just find out in the field. Io find them in bathrooms, coffee shops. I met a guy in Century City… Young kid, 500 grand on “Are You Smarter than a Fifth Grader?” He couldn’t believe it.

Her big tip for would-be contestants? Be flexible. Be ready to spend an entire day on set while maintaining that big personality. Don’t complain. Don’t bury your nose in your phone. Got all that? Well, you could become part of her stable of regulars.

Pomerantz: I’ve had people audition for the same shows. I have actually used contestants that I’ve had on three or four game shows. ‘Cause if you know they’re really good, and they’ve got the personality, you wanna to know. You don’t have time to sift through a lot of people.

Of course, each game show also has rules about these people who are regular contestants. They can’t have been on another show for x months, they can’t have won x amount. Again, it depends on the show.

But for people like Mueller, regular appearances are a fun distraction from workaday life.

Mueller: Frosting on the cake. Very very green, tangible frosting that I can spend at a store. But yeah, frosting. And you know, I guess I’ve been on a couple shows now where nothing happened. And I didn’t get picked, or I did get picked and I didn’t play as well as I could have and I didn’t win. And like, I still think those were some of the best days of my life.

Blits: From Marketplace! So what do you do Tess?

Vigeland: I talk on the radio.

Blits: You talk on the radio?

Vigeland: Yeah, I do.

Blits: Is that a good job?

Vigeland: It’s a great job! I love it!

Blits: You get to be by yourself all day long, right?

Vigeland: Exactly! I don’t have to see anybody or talk to anybody!

Blits: Thank you for joining us!

Blits: OK guys, enjoy the show folks! Have a blast everybody! Have fun! Bye bye guys.

Vigeland: All right Stan, how’d I do? Are you going to pick me?

Blits: Yeah, you won’t get your prize because you’re disqualified, but you’re on. That would be so rigged.

Oh but it would be soooo fun!