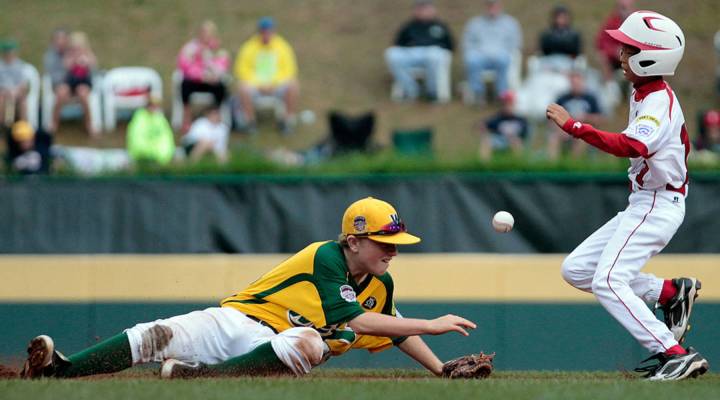 COPY
Shortstop Trevor Windisch of the West team misses an errant throw on a run down play as Kaito Suzuki of the Japan team runs by to score on the play during the 2011 Little League World Series championship game. Rob Carr/Getty Images

Shortstop Trevor Windisch of the West team misses an errant throw on a run down play as Kaito Suzuki of the Japan team runs by to score on the play during the 2011 Little League World Series championship game. Rob Carr/Getty Images
Listen Now

More than 40 million kids play organized sports in this country. And their parents spend a lot of money to keep them outfitted and involved. Five billion dollars in the aggregate.

But of course that number doesn’t mean anything. That figure doesn’t take into account the costs liketraveling to games — gas, motel, meals. Per sports-playing child, a family will spend thousands annually; if a child is a hockey player, parents can easily sink in between $10,000-$15,000 a year.

Author Mark Hyman investigates in his book “The Most Expensive Game in Town” the multi-billion dollar industry that surrounds all this fun and games.

“It really speaks to our vulnerability as parents, because it’s very difficult,” Hyman said. “When you see the child across the street signed up for the soccer clinic at age three, it takes some discipline as a parent to make the decision that it’s just not the right time for my child. You don’t want to your child to fall behind.”

That desire to keeping up with the Joneses via your children has manifested itself in strange ways. Hyman points out the burgeoning industry of sports training tools — wait for it — for babies. Want to put your child on the road to becoming the next big slugger in the MLB? A Michigan company produces DVDs of children under one that ensures that your”Mommy and Me” sessions will give junior an edge in Little League in a few years.

Hyman admits he made “95 percent of the mistakes” he wrote about in his books. His son was a baseball pitcher and Hyman was hish coach. When his kid injured his shoulder, Hyman was more concerned about whether he can pitch the next day. Eventually, his son had Tommy John elbow surgery.

He said the best thing parents can do is let their children call the shots. A parent’s relentless drive to help their children reach their athletic potential may be the reason why 75 percent of kids drop out of organized youth sports by age 13.