Stacey Vanek Smith: The city of London has sold 8 million tickets for the Summer Olympics. In order to gear up for the onslaught of visitors, businesses in London are conducting a “stress test” today. For instance, many people will work from home to avoid taking public transit at peak times. Here in the U.S., some businesses are already focused on the winter Olympics… in 2022. Lake Tahoe wants to host.

Jeff Tyler: The Squaw Valley ski resort has ambitious plans for the future rooted firmly in its past. To see what I mean, let’s take the aerial tram.

Tram Conductor: Five hundred fifty feet up off the ground. Kind of like standing at the very top of the Washington Monument and peeking out.

Up to the Olympic Museum. An old newsreel replays highlights from the 1960 winter games, which were held here at Squaw Valley.

Olympics Newsreel: Eighteen thousand spectators from all over the world wonder if they’re glad they came. It is cold. It is dark. Still, the eighth Olympic Winter Games are about to begin.

Andy Wirth, CEO of Squaw, would like to see history repeat itself. He’s coordinating the campaign to bid for the Olympics in 2022. Wirth says hosting the games would unleash millions of federal dollars to improve infrastructure.

Andy Wirth: Substantially improving the roads, the bridges and the transportation infrastructure in this area. All benefiting the local economy, the regional economy, the state economy. And also the environment.

He says the environment benefits because reducing congestion means reducing pollution. But some locals don’t see the value.

Jamie Schectman: There’s a lot of us who would prefer not to see the 2022 Olympics here. You know, having commercial airlines flying into Truckee. Having four-lane highways for a two week global competition. Yes, there will be stimulus, but it forever changes the landscape.

The leadership at Vail is half-committed to the Olympic bid. Blaise Carrig is co-president of Vail, which owns three ski resorts in the Tahoe area.

Blaise Carrig: At the same time, our company has resorts in Colorado, and there’s an interest to see the games in Colorado as well.

But the ski industry didn’t have much luck the last time it tried to bring the winter Olympics to Colorado. In 1976, Colorado voters — worried about the impact on the environment — gave the Olympics a thumbs down. 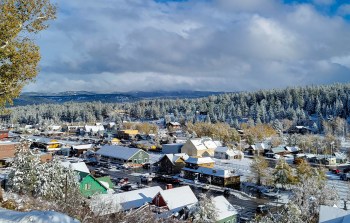