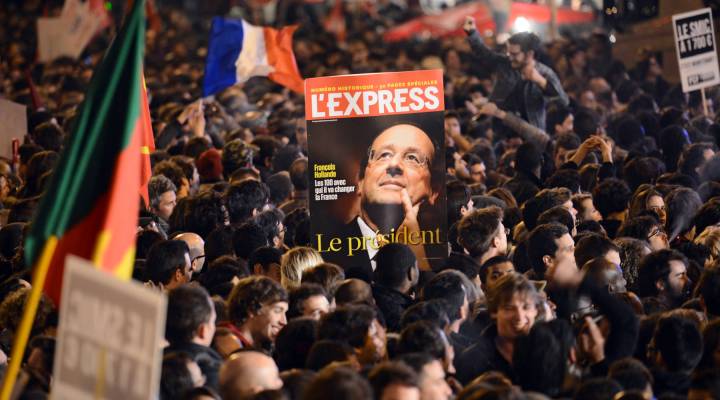 Supporters of Socialist Party candidate Francois Hollande celebrate at the Place de la Bastille in Paris on May 6, 2012 after the announcement of the first official results of the French presidential final round. Hollande won a runoff election with between 52 and 53 percent of the vote, ousting right-wing incumbent Nicolas Sarkozy. FRANCK FIFE/AFP/GettyImages
European Debt Crisis

Supporters of Socialist Party candidate Francois Hollande celebrate at the Place de la Bastille in Paris on May 6, 2012 after the announcement of the first official results of the French presidential final round. Hollande won a runoff election with between 52 and 53 percent of the vote, ousting right-wing incumbent Nicolas Sarkozy. FRANCK FIFE/AFP/GettyImages

Andrew Walker is the economics correspondent for the BBC. He joins me now. Good morning, Andrew.

Vanek Smith: Let’s start with the situation in France. What is the significance of Francois Hollande getting elected?

Walker: He has been talking about wanting to put more emphasis on growth in the way that the Eurozone tackles the financial crisis, and less emphasis than has been the case on austerity – that’s to say on measures to get government borrowing needs down.

The extent of that difference is sometimes a bit overblown. You have to say that Mr. Hollande wants to get the French government borrowing down to nothing, but he just wants to take a little bit longer to do it than Mr. (Nicolas) Sarkozy did.

Vanek Smith: And now to Greece where I understand two of the incumbent parties have been voted out. Explain the significance of that and how it’s tying into the situation as well.

Walker: What we don’t know is what sort of coalition is going to emerge and whether it will be prepared to go ahead with those austerity measures and reforms. If they’re not then I think there are some very difficult questions about whether the bailouts will continue. If the bailouts won’t continue what on earth would Greece’s future be?

Vanek Smith: German voters also voted out the party that the Chancellor, Angela Merkel, is in. It seems like there’s a pretty strong signal coming from voters in Europe that they are maybe not for the austerity measures? Is that fair to say?

Walker: There is certainly some resistance to them. In the particular case of Germany, there’s also some resistance to the bailouts for another reason, which is that they don’t want to be paying for them. But certainly there has been a lot of hostility in Germany and a few other countries as well – the Netherlands and Finland, for example, who are the ones who see there money potentially being at risk.

Vanek Smith: And finally Andrew, where do you see things going from here? What are we watching for this week?

Walker: I think the first thing to watch for is what happens with the negotiations to form a new coalition in Greece. I think we’ll also want to look very carefully to see what happens when president elect Francois Hollande meets Chancellor Merkel of Germany – can they find some way of smoothing over these differences they ahve about austerity versus growth? My guess is that they can, but it will be very important for the rest of the Eurozone that they do succeed in doing that.

Vanek Smith: Andrew Walker is the Economics correspondent for the BBC. Thank you Andrew.