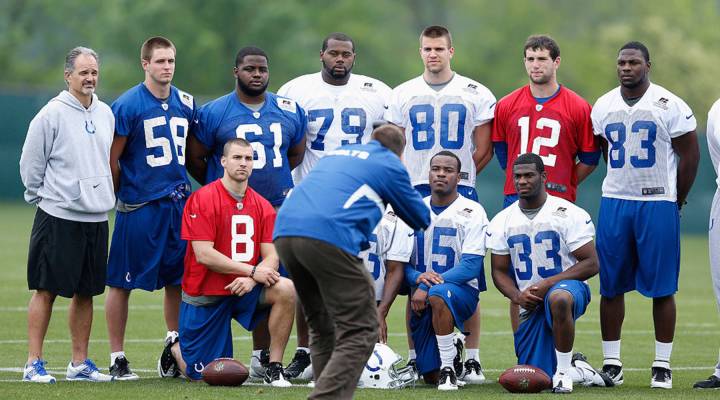 How should athletes manage their money?

COPY
The rookies of the Indiana Colts. Jon Peterson of Next Level Financial Group says that in the end, new NFL recruits are just 20-year-old kids. Joe Robbins/Getty Images

How should athletes manage their money?

The rookies of the Indiana Colts. Jon Peterson of Next Level Financial Group says that in the end, new NFL recruits are just 20-year-old kids. Joe Robbins/Getty Images
Listen Now

For the average American, we save up for a home and retirement. For athletes, that process is reversed; they start out with enough money to buy a house and retire comfortably. But many athletes fall into bankruptcy and financial ruin, like NFL legend Warren Sapp. So how does all that money disappear?

Jon Peterson has been advising professional athletes about their finances for more than two decades. He’s a registered principal with Next Level Financial Group in Sausalito, Calif. and currently represents 65 NFL players. He says that, in the end, new recruits are just “20-year-old kids,” who just moved away from home and got their first job. That first paycheck may seem endless to them, but they have to realize it’s not. Athletes are particularly vulnerable to hefty pay cuts, due to injuries. Peterson says he advises his clients to figure out a budget and stick with it.

He also says that players need to keep a close eye on their money — something Warren Sapp said he wished he did. New “friends” and family members will come out of the woodwork to take advantage of the new wealth. If a player wants to invest his money into a business, they need to do their legwork on who the partner is and what the venture is.