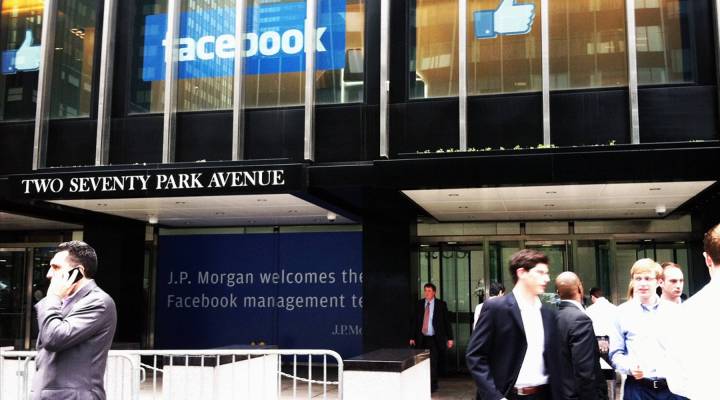 Kai Ryssdal: There was quite the kerfuffle in front of JPMorgan’s headquarters on Park Avenue in Manhattan today. News crews were swarming. Passersby were snapping picutures. Police and crowd control barriers, the whole deal. No, not an Occupy Wall Street protest. Facebook was in the building. Executives were in town to meet with some of the bankers that’re helping ’em go public week after next. And JPMorgan was decked like it was hosting a head of state. It even flew a Facebook flag next to the Stars and Stripes.

Marketplace’s Stacey Vanek Smith has the latest in what’s gonna be a mind-numbing series of stories about a company IPO like none other.

Stacey Vanek Smith: On the sidewalk outside of JPMorgan’s headquarters, it was clear the company had Facebook fever. There was the flag, a giant banner, a signature thumbs up “Like” symbol in the window. And so many TV trucks and barricades, executives went in through a side door. JPMorgan was handing out Facebook coffee cup holders and baseball hats, and pretty much everyone going in or out of the building was wearing a tie or scarf in Facebook blue.

Max Wolff: I think we’re looking at a physical manifestation of the amount of excitement with a side order of hype around this Facebook deal.

Max Wolff is chief economist at Greencrest Capital. He says he’s never seen this kind of fanfare around a company going public. Wolff says JPMorgan and the 32 other banks helping Facebook go public are under enormous pressure to make the stock a success. Facebook and its bankers take to the road next week to drum up interest from investors.

Wolff: You’re going to see T-shirts and speeches and stories and a media blitz designed to tell the world, Facebook is here, you’ve got to be a part of it — and yes it is worth very close to $100 billion.

Chris Low: There’s a tremendous amount at stake. A deal like this is life or death for the investment banking department. It’s enough to keep them going for another year.

Banks stand to take in around $100 million in fees from the Facebook IPO — minus the cost of hats. Facebook is expected to start selling shares later this month.