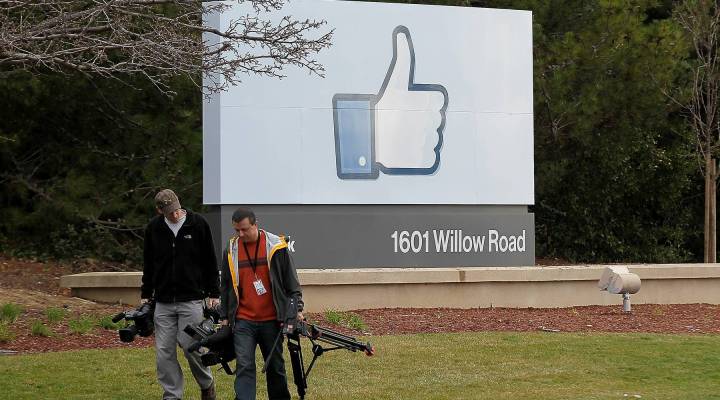 PODCAST: Closer to a Facebook IPO, cloudier on an employment recover

COPY
Television cameramen walk away from a sign standing in front of the Facebook headquarters on February 1, 2012 in Menlo Park, Calif. Justin Sullivan/Getty Images
Mid-day Update

PODCAST: Closer to a Facebook IPO, cloudier on an employment recover

Television cameramen walk away from a sign standing in front of the Facebook headquarters on February 1, 2012 in Menlo Park, Calif. Justin Sullivan/Getty Images
Listen Now

New orders for U.S. factory goods in March recorded their biggest decline in three years as demand for transportation equipment and a range of other goods slumped, government data showed on Wednesday.

The jobs picture in the U.S. clouded over today, with news just now that businesses did not hire nearly as many people as expected in April.  The data is for private sector businesses as tabulated by the payroll company ADP. Companies added 119,000 jobs last month, a drop of 40 percent from a month earlier.

If you want to know how the housing market is doing, you can check this morning’s numbers from the Mortgage Bankers’ Association. They say mortgage applications were up about 3 percent last week.

And here’s some news:  the ratings agency Standard and Poor’s just now, upgraded the creditworthiness of Greece.  It was in what’s called “selective default” but now it’s up to a triple-C with a “stable long-term outlook” after it finished chopping its debt payments…the famous “haircuts” it handed to bond investors.

Facebook has apparently figured out a date for its initial public offering — May 18th.

Shares of the nutritional supplement company Herbalife plunged yesterday, because of the comments of a powerful hedge fund manager on a conference call.

To San Francisco, where residents on Chenery Street are a bit puzzled. They’ve apparently started getting tickets for not turning the wheels on their cars toward the curb when they park as is typically required on hills. The residents are puzzled because they don’t think they live on a hill — especially by San Francisco standards. According to the San Francisco Chronicle, the reason they’re getting tickets is either a desperate search for cash by the city – or a rogue parking attendant.

For all of you brainwashed by television in the 70s, what’s “ooey gooey rich and chewy inside”? If you said “FIG Newtons,” nuh uh.   According to the New York Times, Nabisco’s new ads are calling them just “Newtons.” First of all, you can get them with fruit other than figs.  Plus, many folks are of the mistaken opinion that the fig lacks pizazz. I find it a thing of beauty, especially with balsamic vinegar.