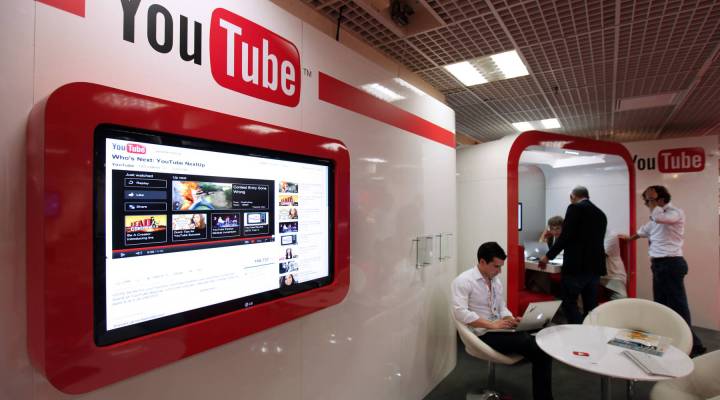 Kai Ryssdal: We’re a couple of weeks away from the biggest economic event of the television season. The upfronts, the big parties and previews of new shows that networks roll out to convince advertiser to buy commercial time. It’s a big deal — big as in $9 billion of ad time on the line. And, of course, when you’re talking that kind of money, there’s bound to be some competition. It’s called Newfront, as opposed to upfront. A lot of the same big-brand advertisers are there — it’s the shows that’re different. These have been created by Yahoo and Google and Hulu to be watched online — with ads, of course.

Stacey Vanek Smith: Thousands of people from advertising agencies, television studios, Hollywood and, of course, Internet companies came together for the Digital Upfronts this year. The goal: advertising the possibilities of online video to advertisers.

Mark Beeching: Seeing that there was no venue, no market space for brands to seize all the opportunity now. So this was as simple as that. And yeah, it’s gotten bigger and bigger.

A lot bigger. This year, for the first time, Yahoo, YouTube, AOL and Hulu were there touting original online shows.

“Electric City” clip: All who respect our authority over electrical power enjoy the benefits.

That’s a clip from “Electric City,” an animated series written and directed by Tom Hanks for Yahoo. Yahoo is also debuting a weekly health and wellness show starring Katie Couric. Erin McPherson heads original prorgramming for Yahoo. At one digital upfronts event, she sounded an awful lot like a TV executive.

Erin McPherson: One of our strategic programming pillars is blockbusters and I think that’s because our platform, reaching 700 million unique users, is positioned to do the Michael Bay of the Internet.

That would be Michael Bay, who directed “Transformers.” And if Yahoo is going all Michael Bay mass market, rival YouTube is going in the opposite direction. The Google-owned video site is spending $100 million to develop 100 channels that appeal to highly-targeted audiences. There’s a Madonna dance channel, a Wall Street Journal channel, and even a channel where astronomy enthusiasts can get the intergalactic lowdown.

YouTube clip: M24 is the Sagitarius star cloud and it’s actually one of the biggest items in the Messier catalogue.

AOL, Netflix and Hulu are also launching shows this year. Bill Ward is a social media professor at Syracuse University. He says it’s clear why Internet companies are getting into show business.

Bill Ward: They’re realizing if they’re just a pipeline they can be seen more as a commodity, where if they’re actually creating original content, you can sell advertising around the content.

Online video advertising is expected to reach $3 billion this year and $9 billion by 2016. Advertisers are excited because they can do things online that they can’t on TV. When it comes to Internet programming, the lines between content and advertising get pretty blurry. Case in point: the hit online show, the “Mom Life.”

“Mom Life” clip: Do you know how much calcium your child is supposed to be getting?

Sitting alongside that episode on healthy bones? An ad for TruMoo Chocolate Milk. The “Mom Life” has reached 100 million viewers and tackles issues about child rearing, health and beauty. Advertisers include Johnson & Johnson and Kraft. Host Jennifer Pate says sponsors are very involved in the content.

Jennifer Pate: We create content that we’re passionate about that aligns with their messaging. We really work directly with the brands, we look at them as partners.

Welcome to the brave new world of branded content. Syracuse University’s Bill Ward says all of media is moving towards this seamless experience — where ads and content not only flow together, but become almost indistinguishable.

Ward: You’re watching a video and you like the sweater that somebody’s wearing, and you roll your mouse over that and then it tells you — without interrupting the video — what brand sweater that is, how much it is, and with a click you can purchase that sweater. That’s a pretty engaging experience.

And potentially a profitable one, if you made the sweater or the show. An estimated 145 million people are watching online videos — and the ads that come with them.