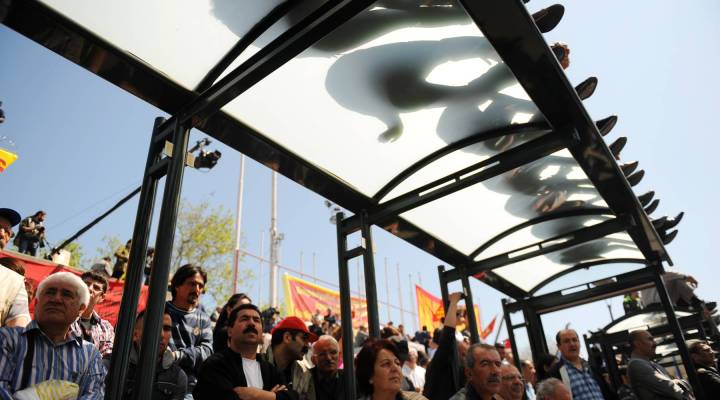 COPY
People sit on bus stop roof as others sit under during a May Day rally in central Istanbul, on May 1, 2012. BULENT KILIC/AFP/GettyImages
Mid-day Update

People sit on bus stop roof as others sit under during a May Day rally in central Istanbul, on May 1, 2012. BULENT KILIC/AFP/GettyImages
Listen Now

Stock markets are closed in many places overseas today for the May Day holiday also known as International Workers’ Day.

The nation’s largest 401k administrator, Fidelity, says its customer retirement accounts surged about 8 percent in the first quarter of the year. The S&P 500 is up 11 percent so far this year – for some comparison.

Japan’s auto sales were up 92 percent last month compared with a year ago. Chrysler’s U.S. sales rose 20 percent in April as the company continued its comeback from financial disaster.

Chesapeake has just disclosed that the Internal Revenue Service wants to know more about perks for its CEO. The IRS is interested in questionable loans taken out by the company’s CEO.

The debt that came back from the dead: a Massachusetts woman got a bill from the state of New Jersey for $73. The Newburyport Daily News says New Jersey thinks it overpaid Alice Mainville on an unemployment check 35 years ago back when she was a teenager.  Apparently, the law in Mainville’s home state keeps these things on the books forever. Or put another way, in Jersey we don’t forget no debts.

While we’re talking Detroit, Ford has an idea to make its car seats a little more comfortable: Fill them with cash. Seriously. Ford is thinking about adding old, shredded, out-of-circulation U.S. currency to its list of materials that can be used in seat cushions. So when they say you get $500 cash back with a purchase of a new Ford Focus… They might really mean it.

The nation’s largest 401k administrator, Fidelity, says its customer retirement accounts surged about 8 percent in the first quarter of the year. The S&P 500 is up 11 percent so far this year, for some comparison.