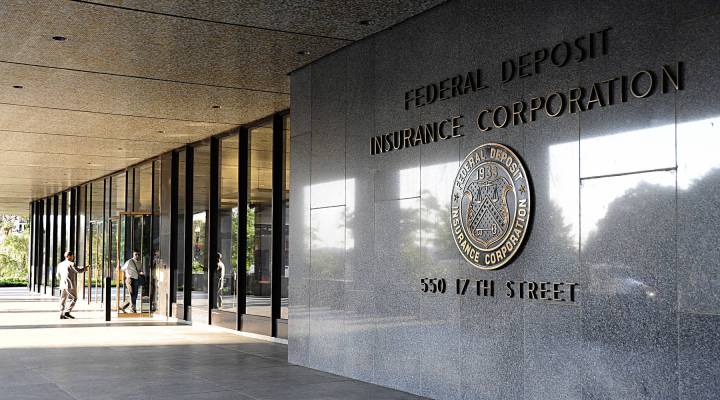 Seventeen banks have failed so far this year, but their customers can rest easy -- thanks to the Federal Deposit Insurance Corporation, as Sr. Producer Paddy Hirsch explains. Karen Bleier/AFP/Getty Images
Marketplace Whiteboard®

Seventeen banks have failed so far this year, but their customers can rest easy -- thanks to the Federal Deposit Insurance Corporation, as Sr. Producer Paddy Hirsch explains. Karen Bleier/AFP/Getty Images

Every week it seems there’s a bank failure in the news.

Actually it doesn’t just seem that way — it pretty much IS that way. Five banks failed in March. Four in February. Seven in January. We’re running at an average of seven failures a month over the past six months.

When a bank fails, it’s often sold to another bank. That’s what happened to my bank, First Federal of California. It failed in 2009, and was sold to OneWest Bank.

OneWest did a very generous thing: it guaranteed the deposits of all First Federal customers. More often than not, if a bank goes bust those deposits are not guaranteed.

They are, however, insured.

That’s right, if your bank fails, your money is insured. If your bank goes under, the Federal Deposit Insurance Corporation (FDIC) will refund your money up to the sum of $250,000 per individual bank account.

But while the FDIC is a government organization, that $250K per account is not government money. It’s the banks’ money.

It’s all about that “I” in FDIC. Insurance. The FDIC is an insurance plan.

Here’s an analogy for you: I like to think about bank managers as gnomes. You know, all bent over, clutching bags of money (our money), with those big old gnarly warty noses.

Anyway, imagine all those gnomes gathering every month at the gates of the government. They all line up and each of them has to drop a gold coin into box labeled FDIC. Every month they do this, month after month, so the box is stacked full of gold.

Because if one or more of these gnomes goes bankrupt, if they make silly investments or blow the bank’s money — that’s OUR money — in Vegas,  we don’t have to worry. And neither does the government.

Uncle Sam just cracks open that box of gold, and hands out cash to people who deposited money with that particular gnome’s bank.

And it’s a good thing they do. Because if they didn’t, either the government would have to pay, or we’d simply have to wave goodbye to our cash.

Hardly a pleasant prospect either way!