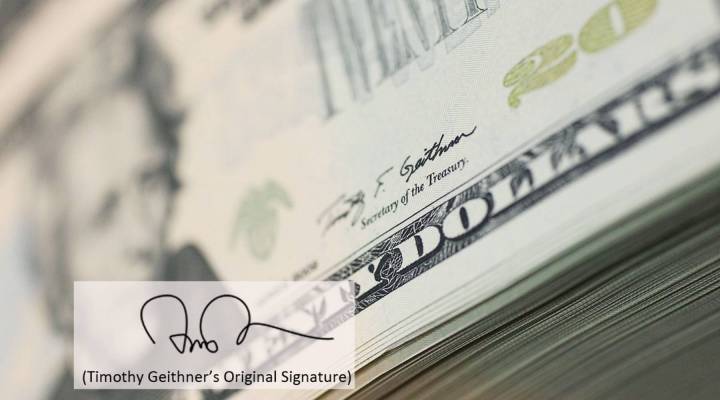 COPY
Treasury Secretary Timothy Geithner's signature before and after. He had to change his autograph to appear on U.S. currency. Mark Wilson/Getty Images
The Geithner Interviews

Treasury Secretary Timothy Geithner's signature before and after. He had to change his autograph to appear on U.S. currency. Mark Wilson/Getty Images
Listen Now

You’ve probably got a dollar or two in your pocket with Timothy Geithner’s signature on it. But the Treasury Secretary’s John Hancock wasn’t always, shall we say, legible. He had to change his autograph from this

when his signature was added to the storied list of those featured on our nation’s currency.

Marketplace host Kai Ryssdal squeezed this curious detail out of Geithner during his exclusive interview Thursday afternoon in San Francisco, which airs Friday on Marketplace.

Kai Ryssdal: I gotta ask you about your handwriting. Is it true that this used to be your signature

and you changed it into that

Timothy Geithner: Yes it is true.

Ryssdal: And why would you do that?

Geithner: You mean from this

? I thought you liked the one on the one dollar bill

Ryssdal: No, that one

Geithner: Well, I think on the dollar bill I had to write something where people could read my name. That’s the rationale.

Geithner: I didn’t try for elegance. I tried for clarity.

Ryssdal: ‘Cause you know Mrs. Quiggly, my 1st grade teacher, she would have given me the big F on that one.

Geithner: Well, I took handwriting in the third grade in New Delhi, India, so I probably did not get the best instruction on handwriting.

Some might say both versions are better than that of some of the past signatures featured on U.S. Currency, as seen here.

Learn more about Geithner and listen to our full interview with the Treasury Secretary here.

The Geithner Interviews
Tags in this Story
Share this Story