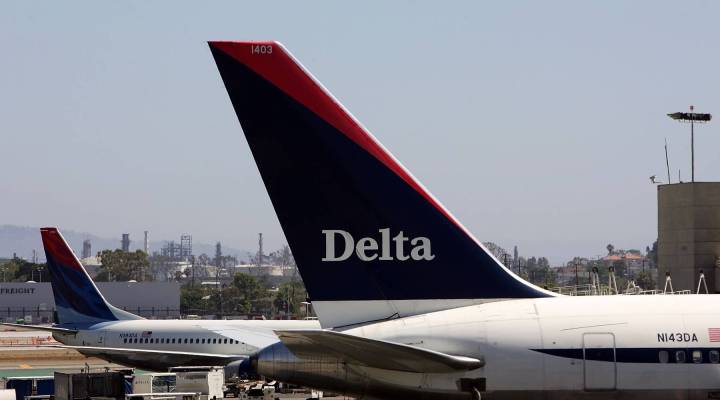 A report out today from the special inspector general who oversees the 2008 bank bailout — the TARP, as it’s called –– has some bad news about small banks. It says more than 300 small banks that got money from the government during the financial crisis – have yet to pay it back. They still owe about $15 billion in total.

While forecasters were expecting Britain’s economy to grow, government figures today show British GDP has fallen two tenths of a percent.  That means it’s official:  The United Kingdom is back in recession, the first double-dip since the 1970s.

News today that orders for long-lasting goods in the U.S. have dropped by the most in three years.

Both Delta and US Airways say they made profits last quarter, but lost money on the flying part of their business. Delta, for example, made money because it bought fuel in advance when prices were lower.

Apple surprised analysts yesterday when it reported a doubling of its profit last quarter compared with the same period a year ago. Apple shares are up about 8 percent in pre-market trading – after falling about 13 percent in the past couple weeks.

A while back, a guy who owns “Winking Willy’s Fish and Chips” in Scarborough, England goes in for a loan.  According to Bloomberg News, the guy says his bank has a great idea:  he can pay extra for some insurance in case interest rates go up.  Turns out it’s a complicated derivative that goes haywire and his payments go from $275 to $4,000 a month. (The Winking Willy guy takes HSBC bank to court; they settle.)  This week British lawmakers met to talk about what to do about derivatives sold to people who may not have understood them or needed them.  Many customers were elderly.  The British Bankers Association suggests customers get independent advice before signing contracts.

To Palm Desert, California… Where there was an unusual wedding on Sunday. About 100 people gathered as the bride, Scruffy Rubin walked down the aisle to her waiting groom, Snickers Carter. We should note that the bride and groom are dogs. According to the Desert Sun newspaper, their owners threw them a $5,000 wedding complete with a cake, open bar and a reception.