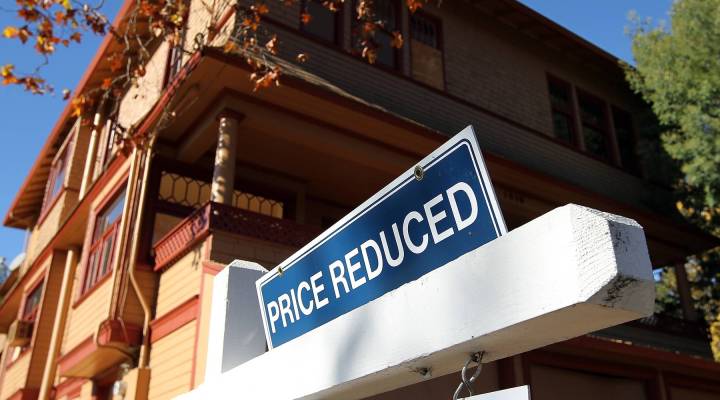 COPY
A 'price reduced' sign is posted in front of a home for sale on November 30, 2011 in San Rafael, Calif. Justin Sullivan/Getty Images
Mid-day Update

A 'price reduced' sign is posted in front of a home for sale on November 30, 2011 in San Rafael, Calif. Justin Sullivan/Getty Images
Listen Now

The flow of people moving between Mexico and the U.S. is now close to zero right now.  That surprising new data today comes from the non-partisan Pew Hispanic Center. By comparison, over the last four decades,  an estimated 12 million Mexicans came to the United States.

U.S. home prices stayed basically flat in February according to the S&P Case Schiller Index. Without adjusting for seasonal fluctuations, prices actually dropped 0.8 percent, to reach the lowest level since 2002.

We’ll get earnings today from Apple, which has seen its stock price tumble some 13 percent in just over a week. 3M today said its profits are up 4 percent, right were forecasters expected. But a surprise loss for Radio Shack — prepaid phone plans and handsets aren’t selling as well as expected. U.S. Steel posted an adjusted first-quarter profit, partly because it shipped more flat-rolled steel in the quarter.

A two day meeting gets started today at the Federal Reserve and economists are waiting to see if the Fed offers any clues about whether more economic stimulus is coming.

A day after the government in the Netherlands fell amid opposition to budget cuts, an auction of Dutch government bonds went well, signaling investor confidence.  Spain today had to offer higher interest rates to sell a pile of its  3 month bonds, suggesting investors were interested but nervous.

You’ve heard of people having hot dog eating contests and pizza eating contests. Well in Russia they do things their own way. A caviar eating contest. Alexander Valov won the $326 prize after stuffing himself with almost $5,000  worth of luxury black caviar iIn just 86 seconds.

This genre of story normally comes out of Malibu but dateline, Great Falls, Virginia?  Neighbors are upset that someone is building a new house they consider too fancy for what is already an upscale-but-leafy part of the Washington, DC suburbs.  The Washington Post reports that “Le Chateau de Lumiere,” – The Castle of Light – as its owners call it, has but five bedrooms.   It does, however, have some square footage to it — 25,400 – and is apparently modeled on the Palace of Versailles.