Fresh off his ghostly appearance at the Coachella music festival on Sunday, Tupac, or at least whoever controls the hologram of Tupac, is considering a tour. Ah, there’s nothing like paying a hundred bucks to go see a live concert and being treated to a video projection of pre-recorded music. Maybe my cynicism is in the minority, because people seem to be eating up video footage of the dead rapper “performing” with Snoop Dogg.

One option would be a tour in stadiums, involving other hip-hop stars, including Eminem, 50 Cent and Wiz Khalifa. Alternately, they could stage a more limited tour, featuring only Dre, Snoop Dogg and the virtual Tupac, in smaller arenas.

Now, where have I seen this before? Was it A Tribe Called Quest? U2? Carrie Underwood? Oh wait, I know…

And if you want to get technical, the image displayed at Coachella wasn’t really a hologram. According to Rolling Stone, the hologram “is in fact a 2D image projected to appear as a 3D effect. To achieve this, a digital image of the Tupac animation was projected onto a reflective surface on the floor of the stage, which then bounced on to a piece of Mylar that reflects the image while appearing otherwise clear. When Snoop Dogg appeared to be rapping along with Tupac, he was standing behind the Mylar screen. In other words: MAGIC!”

The Journal reports that this trick actually dates back to an 1862 stage adaptation of a Dickens story. That particular story did not, however, involve a shirtless Tupac Shakur. 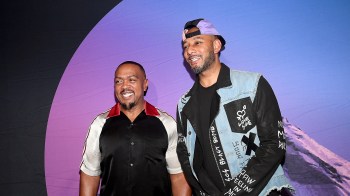