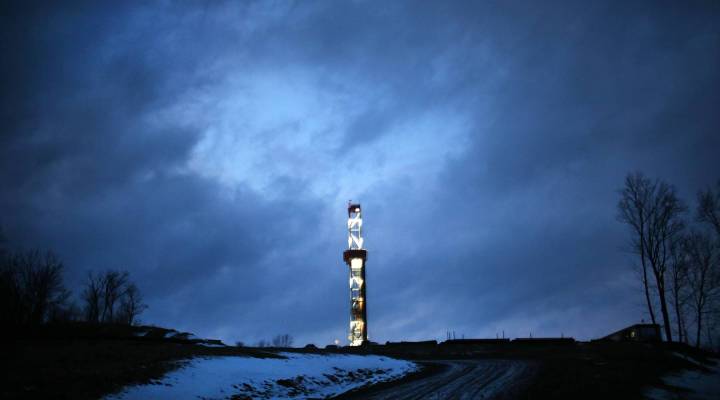 A new, worrying hint this morning about America’s job market. The number of people signing up for unemployment benefits rose by 13,000 over the last week.  That puts the seasonally-adjusted number at 380,000.

Natural gas prices have fallen to their lowest point in about a decade. That’s thanks to over supply and low demand because of the warm winter.

Royal Dutch Shell stock was down about 4.8 percent this morning after a quote “light sheen” of oil was spotted near some of its facilities in the Gulf of Mexico, 130 miles  southeast of New Orleans.  The company’s checking.

The new boss of battered electronics giant Sony says he sees the company’s future in three things:  digital imaging, video games, and mobile electronics. Notice he did not say TV sets or laptop computers.  Kazuo Hirai also confirmed reports that Sony will cut 10-thousand jobs this year. But he’s quoted as saying he will “definitely change Sony and revive it.”

The World Trade Organization says the growth in global exports is expected to slow to a 3.7 percent rate in 2012.

And if you don’t like the economy, move to Australia.  Word today that Australian employment moved past everyone’s expectations with the jobless rate there of just 5.2 percent. But don’t try going to London on the cheap anytime soon. According to the travel website Kayak. Flights across the pond are up 14 percent compared to this time last year, and they’re expected to go higher as we approach the London Olympics.

Google will report its quarterly earnings after the stock market closes today.

To South Greensburg, Penn., where one local official has had it with garage sales. He’s proposing a law that would limit residents to two two-day sales per year. He told KDKA TV he wants to, “prevent people from going to flea markets, buying junk, bringing it home, then putting it into their garage and calling it a garage sale.”

If Norman Rockwell were here, he’d paint the modern American family dining out, parents chewing, kid’s face buried in a Game Boy.  Now Chili’s is making it official.  The restaurant chain is installing touch-screens on tables, so junior can disappear into more games and so parents can order more drinks, get dessert, or pay the bill without having to flag down a human waiter.  Hey, if a touch screen is good enough to buy unleaded gasoline, why not a Chili’s ‘Presidente’ margarita?