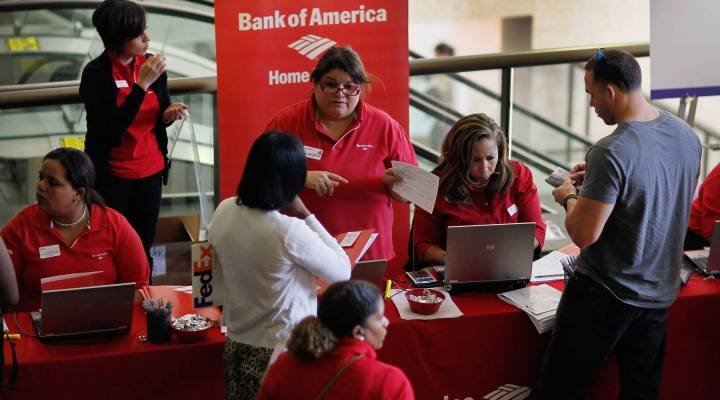 Bank of America mortgage services representatives help register people looking for help with their mortgages on February 22, 2012 in Miami, Fla. Bank of America is among the banking giants who have seen their stocks soaring recently. Joe Raedle/Getty Images

Bank of America mortgage services representatives help register people looking for help with their mortgages on February 22, 2012 in Miami, Fla. Bank of America is among the banking giants who have seen their stocks soaring recently. Joe Raedle/Getty Images

Jeremy Hobson: It’s been more than four years since the giant investment bank Bear Stearns collapsed and the banking system is still in trouble. That’s the word from Fed chairman Ben Bernanke, who said last night that large banks need substantially more capital to ensure a safe financial system. You probably won’t hear anything like that from the banks themselves when they start reporting their quarterly earnings this week.

Stacey Vanek Smith: 2012 has been a banner year for big banks.  Bank of America stock is up 60 percent, which means it outperformed Apple.

Ken Thomas is a bank consultant and economist.

Ken Thomas: A lot of the earnings being reporting by the big banks, are coming, not from traditional earnings, but from loan-loss reserves.

Loan loss reserves are the money banks stockpiled during the financial crisis to cover all of their bad mortgage loans.  Now banks are releasing some of that money.

Thomas: A loan loss reserve is like a cookie jar.  When the economy improves, banks can take money out of the cookie jar, which counts as income.

Banks profits this quarter are more like a sugar high than real income, says NYU economist Lawrence White. He says the actual business of banking isn’t as profitable as it used to be.

Lawrence White: I just am unsure about how strong the banks are.  I still worry that there are lurking losses in mortgages.

White says if the banks aren’t careful, they could that find that when they really need a cookie, the jar is empty.