Stacey Vanek Smith: Someone is ringing Avon’s doorbell for a change. The make-up maven got a buyout offer this morning from Coty for $10 billion. Coty is world’s biggest perfume maker; it makes scents for the likes of Calvin Klein and Stetson. In a statement, Avon says it wants nothing to do with the bid.

Smith: So David, Avon rejected the bid. What’s next?

Gura: Well, Coty is a privately-held company, and today says it’s not going to “go hostile” and try to buy control of Avon without approval by Avon’s board of directors. In rejecting the bid, Avon said it was being undervalued. But Avon has been struggling, and that opens it up to a lot of bids like this one. The company’s had structural issues in the U.S.

And what Avon told investors this morning is that it has a plan: It’s in the middle of a search for a new CEO right now, Stacey, and it wants to see that through.

Smith: If Avon’s struggling so much, why is Coty so interested in buying them?

Gura: You think of Avon, you think of door-to-door sales in U.S. suburbs, but really, their business has shifted overseas. It’s grown in Russia and Brazil. Right now, only about a quarter of Coty’s total sales are in emerging markets, so acquiring Avon could open the door to a lot of new customers.

I talked to Victoria Collin. She’s an analyst with Atlantic Equities, and she said this could also benefit Avon — that “Avon calling,” door-to-door model might isn’t working well everywhere. And Coty could help Avon develop some kind of new Internet sales strategy.

Victoria Collin: Where consumers could just log in themselves, and just purchase the products.  Given the widespread availability of the Internet in some markets, it’s probably easier and probably better for Avon to speak to their customers directly.

And Collin told me that could really turn things around for Avon. Right now, reps keep in good touch with their clients, going door to door, Stacy. But Avon as a whole doesn’t have a really good sense of what its customers want.

Smith: Our own David Gura in Washington. Thank you David. 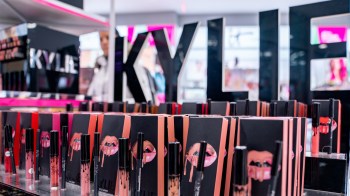 With an eye on social media, Coty takes a majority stake in Kylie Cosmetics