Kai Ryssdal: There was lots of politickin’ in Washington today. Oil in the Senate, the budget over in the House.

Today Republicans passed the budget plan written by GOP Congressman Paul Ryan. It’s the one he calls the Path to Prosperity Budget. It cuts food stamps and transportation and a lot in between. It revamps Medicare and the tax code. Republicans say it would balance the budget by 2040.

Others say there are things that’d get us there faster. From Washington, Marketplace’s David Gura reports.

And up on Capitol Hill, Speaker of the House John Boehner rallied his troops.

John Boehner: We have a $1.3 trillion budget deficit, and we ought to be looking for ways to reduce spending and solve our deficit spending problem.

Maya MacGuineas heads the Committee for a Responsible Federal Budget. She gives Ryan credit for trying to balance the budget by 2040, but she says his plan has some serious problems.

Maya MacGuineas: The fact that it’s lopsided and all spending cuts just means that it’s not a serious budget.

It would cut $5.3 trillion over the next decade. But there are some glaring omissions.

She says if Congress raised taxes and cut defense spending, we could balance the budget faster. This morning, Ryan answered critics who wonder why his budget gives the Pentagon more money than it’s asked for.

Alison Fraser is with the Heritage Foundation, and she says Congress has a duty to keep government small and to protect what she calls its “core constitutional functions.” For conservatives, that includes defense.

Alison Fraser: You know, we need to ensure a sound defense. We don’t want to be raising taxes simply to balance the budget.

And don’t forget, she says, a budget document is also a political blueprint. 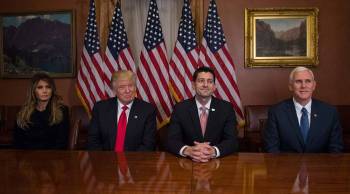