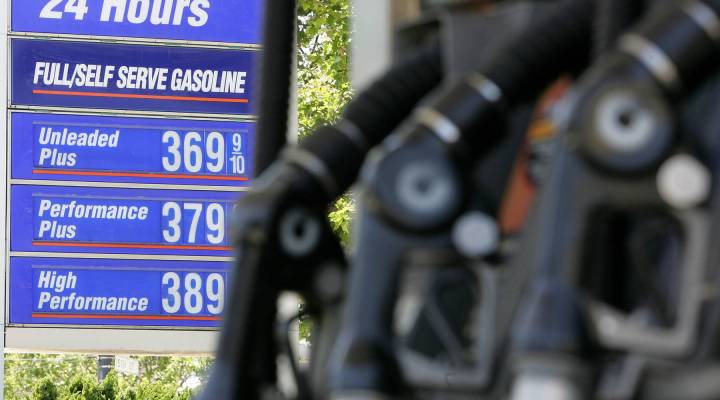 COPY
AAA reports the average price of a gallon of gas in the U.S. topped $3.90 a gallon this morning. It's been going up every day for more than 2 weeks. Justin Sullivan/Getty Images
Mid-day Update

AAA reports the average price of a gallon of gas in the U.S. topped $3.90 a gallon this morning. It's been going up every day for more than 2 weeks. Justin Sullivan/Getty Images
Listen Now

AAA reports the average price of a gallon of gas in the U.S. topped $3.90 a gallon this morning. It’s been going up every day for more than 2 weeks.

Investors are getting ready to go down the rabbit hole with Annie’s. The Organic Food Maker — which features a bunny mascot — raised $95 million in its initial public offering. The stock begins trading today under the symbol BNNY.

Apple is refunding iPad 4G customers in Australia — turns out 4G doesn’t work on the iPad there.

The nation’s manufacturers ordered more long-lasting stuff — or durable goods — last month, up 2.2 percent according to the Commerce Department.

Magic Johnson is the proud new owner of the Los Angeles Dodgers. The Former Lakers star heads a group of investors that bought the Dodgers for $2 billion. If the sale goes through it would be a record price for a sports team the last one was set in 2009 When The Chicago Cubs sold for $845 million. Now, just for comparison’s sake, here’s what else you could buy for $2 billion these days: season tickets to see the Dodgers for the next 308,000 years. Or about 444 million dodger dogs — and I’ll bet if you buy that many you can have as many ketchup packets as you want.

How would you like to walk a mile in Marie Antoinette’s shoes? Well, somebody can. Last night, a pair of white silk mules believed to have been owned by the French Queen sold at auction in France for nearly $55,000. The shoes were decorated with the tricolor flag symbol of the French Revolution. It’s estimated Marie-Antoinette owned about 500 pairs of shoes.