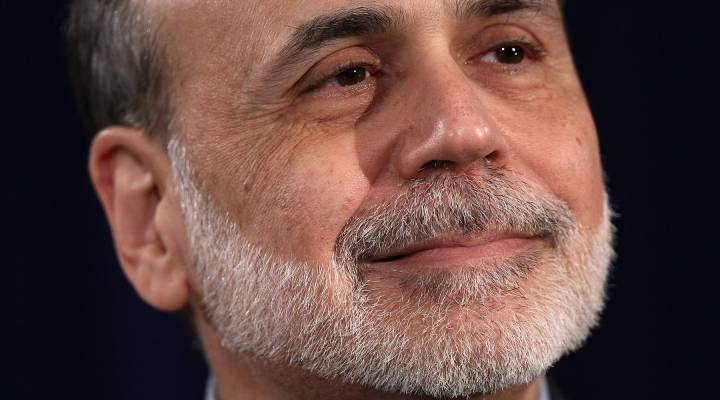 Why investors should thank the Fed

Since the Federal Reserve and Ben Bernanke began quantitative easing II, stock prices in the U.S. went up something like 28 percent, adding $3.5 trillion. Win McNamee/Getty Images

Why investors should thank the Fed

Since the Federal Reserve and Ben Bernanke began quantitative easing II, stock prices in the U.S. went up something like 28 percent, adding $3.5 trillion. Win McNamee/Getty Images

Vanek Smith: So Allan, tell me: Why should investors thank the Fed?

Sloan: Because thanks to the Fed, U.S. stock market prices are much, much higher than they would otherwise be.

Vanek Smith: And how has the Fed helped stock prices?

Sloan: Because they did something that they called quantitative easing II — which is fancy for ‘printing money’ — in August of 2010, and in the six months after that, stock prices in the U.S. went up something like 28 percent, adding $3.5 trillion. Which a number of analysts who are not lovers of the Fed, say is due almost entirely to the Fed.

Sloan: Well you can’t prove it, but you can’t really prove anything in the stock market. But as a fellow named Bob Waid, who’s a very well-regarded analyst at Wilshire — he attributes almost the entire six-month increase of $3.5 trillion to the Fed. And if he’s willing to do it, I’m willing to take his word.

Vanek Smith: So how does this shake out in the end for investors? Stocks have gone up, interest rates have gone down. Who are the winners and who are the losers here?

Sloan: The losers are people who have nothing but interest-bearing investments.

Sloan: Right. People who either have to take more risk or lower their standard of living or eat into their principal if they’re retirees. And the people who’ve won are people like me who have a bunch of stocks and can afford to take chances.

Vanek Smith: A look at the other side of the coin.