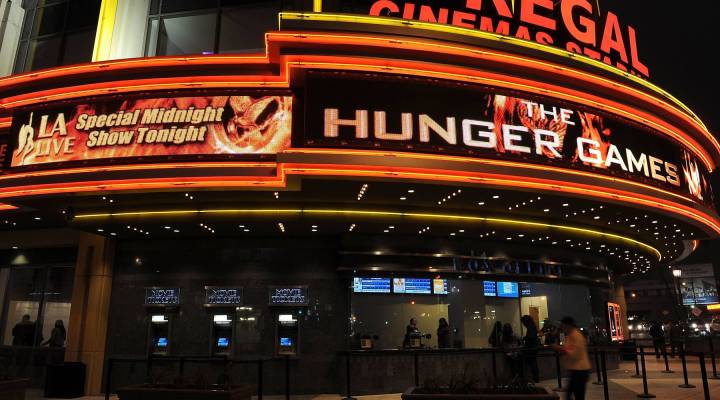 The unexpected winner of ‘The Hunger Games’

The unexpected winner of ‘The Hunger Games’

In today’s Mid-day Extra, a quick snapshot this past weekend at the box office.

Lionsgate had a very good weekend It’s film, ‘The Hunger Games,’ took in $150 million dollars domestically over the weekend — making it the third largest movie opening of all time, behind ‘Harry Potter’ and ‘The Dark Knight.’

Not too surprising, predictions set up ‘The Hunger Games‘ as a blockbuster — and it’s one in a line of many.

Stu Levine is the assistant managing editor at Variety. He says that ‘The Hunger Games,’ like the ‘Twilight’ movies, definitely had a built in following: fans of the books.

The big turnout over the weekend could also mark a turning point for Lionsgate — which you might know best as the maker of all the horror film franchise,  Saw.

But there’s more to the story. It turns out, the theater chain that had one of the most successful takes over the weekend wasn’t in New York or L.A. — but Utah.

According to the L.A. Times, the Megaplex theater chain in Utah — owned by the Larry H. Miller Group — made the screenings more of an event by, among other things, setting up a slightly safer teen death match, complete with sumo suits, laser guns, and inflatable swords.

As a result, four of the top six grossing theaters for midnight screenings nationwide were Megaplex outlets, Lionsgate said Friday.

Early on Friday, all of the screens in the chain — 92 — were playing the movie. And despite the high price tag for the premiere party — over 30 bucks — the theaters were packed.

Oh, and by the way – the winner of the fake hunger games at the theater won a backpack and lunch box donated by the studio, Lionsgate — so we know at least one person didn’t go hungry.