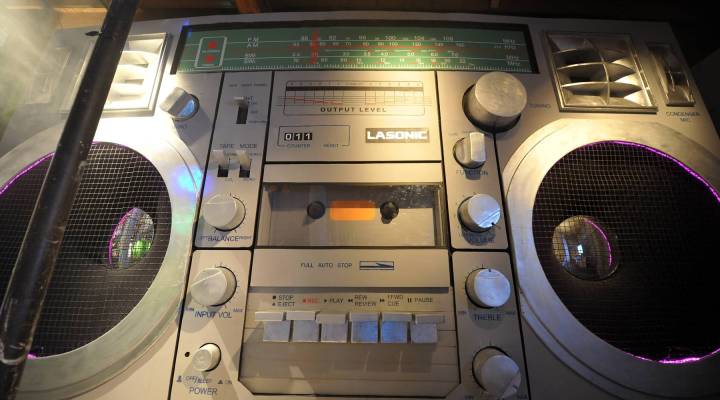 COPY
A giant boombox prop is displayed in the T-Mobile Music Store during the launch of Google Music hosted by T-Mobile at Mr. Brainwash Studio on November 16, 2011 in Los Angeles, Calif. Turns out, boomboxes in some ways made a bigger impact that the iPod or iPhone. John Shearer/Getty Images for T-Mobile
Mid-day Update

A giant boombox prop is displayed in the T-Mobile Music Store during the launch of Google Music hosted by T-Mobile at Mr. Brainwash Studio on November 16, 2011 in Los Angeles, Calif. Turns out, boomboxes in some ways made a bigger impact that the iPod or iPhone. John Shearer/Getty Images for T-Mobile
Listen Now

“The Hunger Games” brought in more than $200 million around the world, making it the biggest opening ever for a non-sequel film.

Federal Reserve chief Ben Bernanke spoke just a few minutes ago. He said the unemployment rate has been declining faster than expected. But he said the job market still has a long way to go: “Discussions of the labor market at this juncture have a glass half empty/glass half full kind of tone. Recent improvements are improving, but as I’ve noted, the jobs market is still far from normal by many measures.” Bernanke said the U.S. economy needs to grow faster to get everybody working again.

To the Arab Shooting Championships in Kuwait, where a Kazakhstan shooter won a gold medal. And instead of playing the country’s national anthem, the event organizers played the spoof anthem from the movie “Borat” instead. The organizers apologized, said the mistake was unintentional and played the correct national anthem afterward.

The Journal of Management and Marketing Research did a study looking at which technological gadgets U.S. households adopted the fastest. Everything from cell phones, to VCRs, to personal computers, and ranked them by the number of households that were using them seven years after they hit store shelves. Coming in at number 1: The boom box. The cassette player kind. More than 60 percent of households had one for cell phones, that number was 10 percent personal computers?  Less than 5 percent