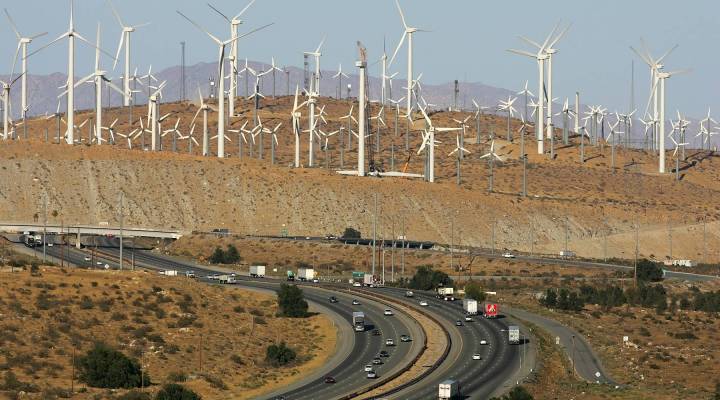 Giant wind turbines are powered by strong prevailing winds near Palm Springs, Calif. Though the state is known for its green jobs, percentage-wise it is equivalent to many others. David McNew/Getty Images
United States of Tech

Giant wind turbines are powered by strong prevailing winds near Palm Springs, Calif. Though the state is known for its green jobs, percentage-wise it is equivalent to many others. David McNew/Getty Images

Stacey Vanek Smith: The Bureau of Labor Statistics produced its first ever tally of the number of green jobs in our economy. Turns out, in 2010, there were 3 million green jobs — about 2 percent of total employment. California had the largest number — more than 300,000 — but that was still just 2 percent of the state’s total jobs.

Mark Muro: Good morning, how are you?

Smith: Fine, thank you. So, were you surprised to find that the percentage of jobs in California that were “green jobs,” was no higher than in other parts of the country?

Muro: Actually, I might have been if I hadn’t been looking at this issue for several years. We have found that these green jobs measurements, which include all kinds of categories — including a lot of manufacturing of green products — really reflect heavily on the manufacturing presence in the state. California is not a huge manufacturer, so it doesn’t look as outstanding as other indicators show that it is.

Smith: Mark, we have heard a lot about how green jobs are going to be a major area of growth in our economy, should we expect them to start making up a greater percentage of the total jobs in the country?

Muro: I think that over time we’re going to see significant growth. I think what we showed in our work was relatively fast growth, especially in certain sexy, innovative, clean-tech segments — where you’re seeing double-digit groth in jobs. I don’t think over the long term this will be a massive job center, but it will be one that will provide innovations that will be important to create new industries in the future.

Smith: Mark Muro is with the Brookings Institution and he’s the principal author of a study released last summer on jobs in the clean economy. Mark, thank you.

United States of Tech
Tags in this Story
Share this Story