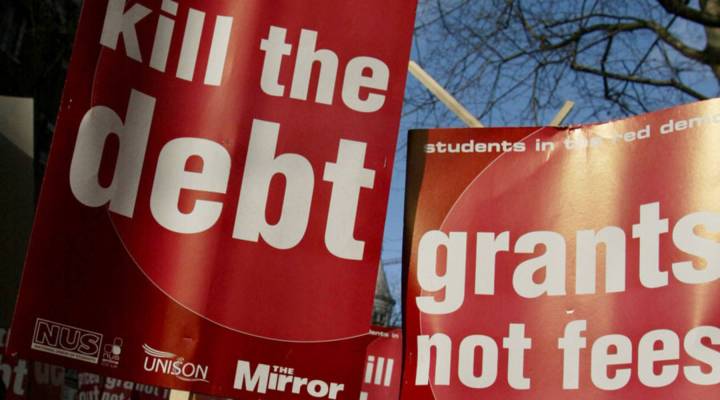 A possible change for bankruptcy and student loans

Students from all over the UK participate in a demonstration February 20, 2002 in London. Here in the U.S., those with student loan debt who file bankruptcy are currently not forgiven their college loans. That might soon change, however. Sion Touhig/Getty Images

A possible change for bankruptcy and student loans

Students from all over the UK participate in a demonstration February 20, 2002 in London. Here in the U.S., those with student loan debt who file bankruptcy are currently not forgiven their college loans. That might soon change, however. Sion Touhig/Getty Images

Stacey Vanek Smith: If you file for bankruptcy, most of your debt will be forgiven — most of it. Current laws make it very hard for student loans to be forgiven. There’s a proposal now in Congress that would change that.

Mark Kantrowitz is the publisher of FinAid.org and an expert in college finances. Good morning, Mark.

Smith: Mark, what would forgiving student loan debt do to the economy?

Kantrowitz: It wouldn’t have a dramatic impact because the total loan payments on all student loans are about $50, $60billion a year — so about 0.4 percent of GDP. But it would provide some relief to borrowers who are struggling to repay their loans.

Smith: Is there a worry that this might encourage students to take out larger education debts, and perhaps to file for bankruptcy faster or more easily than they would otherwise?

Kantrowitz: There’s always a concern about moral hazard where a student borrows more than they need to knowing that they have the potential to discharge it in bankruptcy or in other means. But right now, it’s incredibly difficult to discharge your student loans in bankruptcy — both federal and private student loans are effectively non-dischargeable.

That’s because both federal and private student loans are exempted from discharge in bankruptcy unless the borrower can demonstrate undue hardship in an adversarial proceeding. Only 29 of 72,000 borrowers with an active bankruptcy succeeded in getting a full or partial discharge of their student loans.

Smith: Why has education debt been an exception of the debt that can be forgiven in bankruptcy?

Kantrowitz: For federal loans, it’s obvious: he who holds the gold makes all the rules. Congress passed laws in 1976 and ’78 to protect federal student loans from bankruptcy discharge because it’s the federal government’s money. And the federal government has provided some options for financial relief — such as deferments, forbearances. So it’s evolved over the years, but the availability of the exception to discharge hasn’t led to private student lenders making loans to students who are much more likely to default on their loans. So, given that there’s not public policy benefit from providing the bankruptcy discharge, there doesn’t seem to be any valid reason why student loans should be in a different category than credit card debt.

Smith: Mark Kantrowitz is the publisher of FastWeb.com and FinAid.org. Thank you Mark.