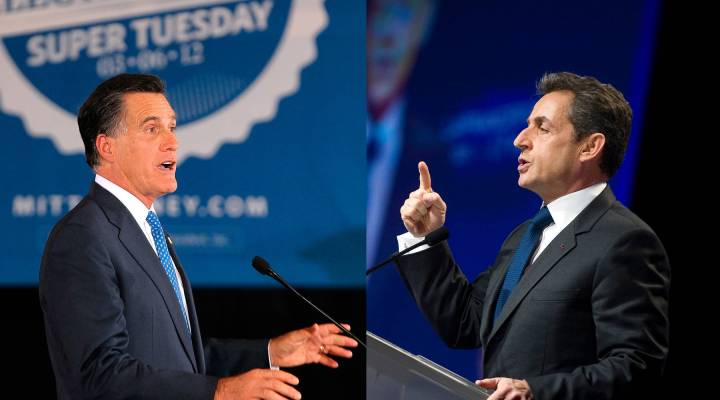 How Mitt Romney and Nicolas Sarkozy are similar

How Mitt Romney and Nicolas Sarkozy are similar

Stacey Vanek Smith: French President Nicolas Sarkozy spoke in Toulouse this morning. He asked the country’s children to honor students who were killed at a shooting in a Jewish school.

Sarkozy’s also in the midst of a tough reelection campaign. He’s facing some of the same critcisms that Republican Presidential Candidate Mitt Romney has been battling.

Atlantic.com reporter Heather Horn wrote a story on this and joins me now to explain. Heather, thank you for joining us.

Heather Horn: Thank you for having me.

Vanek Smith: So Heather, you compare Sarkozy and Romney. Describe their similarities.

Horn: Well you want to be careful not to push the comparison too far; what is certainly true is that the men superficially seem to have very few similarities. Romney is known for being a family man, and Sarkozy, that is not generally one of the terms that one uses to describe him.

What is true, however, is that candidates with wealthy and flamboyant personal lives often have problems relating to voters, and Romney has had a little bit of a problem with that. For example, in the case of saying, ‘Well I don’t follow Nascar personally, but I have friends who own Nascar teams.’

Sarkozy’s had some problems with that, particularly related to his wife, actually. Bruni-Sarkozy, she said, ‘Well we’re very modest people.’ Now that probably isn’t the thing to say when you are an heiress, a rather wealthy model, and it’s an election year.

Vanek Smith: How are the two candidates handling this image problem that they have? Are they handling it in similar ways?

Horn: I think it’s fair to say that both of these candidates have not been handling these image issues with what would appear to be a cautious approach. Romney has cracked a few jokes, talked about how he himself is unemployed.

Sarkozy has been – I wouldn’t say it’s an approach really of humor – but it certainly is not particularly apologetic. So neither candidate has been apologizing for his personal wealth, that’s for sure.

Vanek Smith: How has the wealth and lifestyles of these candidates affected the way voters see them in France and in the U.S.?

Horn: I think the first thing to remember is that the way the voters see candidates is often through the lens offered by the media, and both of these candidates have given the media and the voters something to hang on to by providing some rather bad sound bytes, from a campaign perspective.

Now of course, there are all kinds of other issues going on in these two different elections, and the electorates are very different. Perhaps even more so than the American election right now, the French election is very much about the economy. There’s the issue of France’s credit rating; there’s high unemployment. So this is very much in France, as in the U.S., an election about economic matters.

Vanek Smith: Heather Horn is the author of an article in The Atlantic on the similarities between Nicolas Sarzkozy and Mitt Romney. Heather, thank you for joining us.

Horn: Thank you for having me. 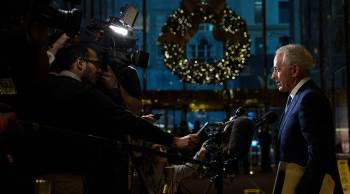