More From This Show
0:00 / 0:00
What have you always wondered about the economy? Tell us
Shelf Life

Kai Ryssdal: Assuming $3.50 or $4-something-a-gallon gas doesn’t dissuade you from driving entirely, anybody who relies on a car to get around inevitably encounters another problem: Where to park the thing. In their most common form, parking lots are a gazillion square feet of asphalt next to sports stadiums or shopping malls or wherever you happen to find yourself. Whatever they look like, though, parking lots aren’t usually much more than an afterthought for drivers.

Not so for Eran Ben-Joseph. He’s a professor in urban design at M.I.T., and the author of the new book “ReThinking a Lot” — as in parking lot. We started with a bit of history.

Eran Ben-Joseph: The first were really curb parking, because people would just actually leave their car in the middle of the street and just do their business. There were no rules. There’s actually an interesting story about L.A., where in the 1920s, the city actually wanted to ban parking in downtown, because at that time, most people actually came with trolleys.

Ben-Joseph: When they did that, the ban lasted maybe only about two weeks because the merchants were complaining that there weren’t enough parking to attract the shoppers. So yeah, parking lots were actually done in many cases in downtown for that, and also the shopping mall itself, in terms of actually providing the free parking as a model in the 1930s.

Ryssdal: So when I look at a parking lot, I see — at best — a parking lot. You, though, you see it differently.

Ben-Joseph: I do. I see a big potential in parking lots. I mean, if you look, we are right here in L.A. and there’s a lot of empty parking lots. Empty, I mean, in terms that sometimes they have cars, sometimes they don’t have cars. Can we do something with those parking lots? Can people play basketball there? Can they be markets during the weekends? So there’s a lot of potential in those empty spaces. I do teach a course that’s called “Site Planning,” and part of the course, it is about designing parking lots. And every time, the students have been asking me, ‘Aren’t there actually some great examples of parking lots that you can show us?’

Ben-Joseph: It’s a tough question. In terms of design, probably the one that was done by Renzo Piano in Italy.

Ben-Joseph: Yes. It’s totally covered with trees, like an orchard. Then you move from the parking lot, there’s very much well-organized entrances to the building into this large, old Fiat factory. So again, the kind of issue of moving through the space as you enter the building. I always like to, again with my students, give a comparison, and if you go to a resort hotel, let’s say in Hawaii, they will already tell you as they enter the parking lot that you’re in a different place. And it’s not about having an ugly parking lot and the hotel be beautiful, it’s already when you enter the parking lot. What I hope is that this kind of attitude will also go into shopping malls and into other types of parking lots that are more kind of mundane and typical.

Ryssdal: I see the point, right? I get that. But the problem is is that for so many of us, much as the car as a utilitarian device, so too the place to put the car is just a utilitarian device. So we haven’t got much time or patience for, ‘Oh yes, let’s make it look pretty and nice and functional.’

Ben-Joseph: Yeah, but it also has other qualities in a parking lot that could be useful. So even if you just want to find your parking space and move into the building, can the space itself be a multipurpose space that can do for society more than just a place for storing your car for a few hours?

Ryssdal: Eran Ben-Joseph, his book is called “ReThinking a Lot.” Thanks a lot for coming in.

Ben-Joseph: Thank you so much, I enjoyed it. 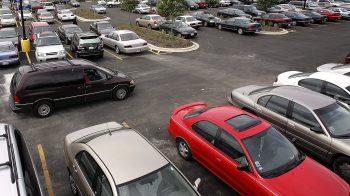