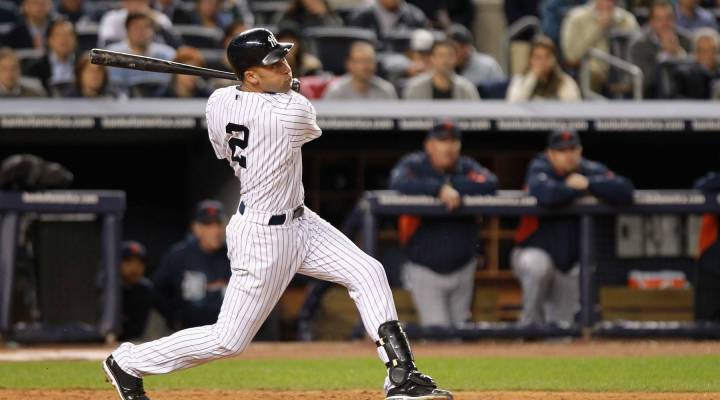 COPY
Derek Jeter #2 of the New York Yankees bats against the Detroit Tigers during Game Five of the American League Championship Series at Yankee Stadium on October 6, 2011 in the Bronx borough of New York City. What will the new Yankees scent smell like? Nick Laham/Getty Images
Mid-day Update

Derek Jeter #2 of the New York Yankees bats against the Detroit Tigers during Game Five of the American League Championship Series at Yankee Stadium on October 6, 2011 in the Bronx borough of New York City. What will the new Yankees scent smell like? Nick Laham/Getty Images
Listen Now

Demand for U.S. home purchases picked up for the third week in a row last week, though applications for refinancing sagged, an industry group said on Wednesday.

If the goal is more American jobs, you want to see exports up and imports down. New data this morning show the opposite. The current account deficit widened much more than expected in the last three months of last year — what we buy from abroad up, what we sell down.

And one way to upgrade your credit rating, wait a couple of days. The ratings agency Fitch has upgraded Greece to “B-,” still “junk” status but better than the “restricted default” that hung around it’s neck last week.

There’s been grumbling among rival banks about JP Morgan Chase getting a jump on the markets with an early release of the results of its stress test, before the Federal Reserve issued its official results later in the day. However, the Wall Street Journal today cites a senior Fed official suggesting it wasn’t JP Morgan’s fault but instead a miscommunication.

To the weirdest slash coolest Groupon deal ever: A trip to the bottom of the Atlantic Ocean. The site of the Titanic wreck, to be specific. And if you’re the lucky bidder, you can do it for just $12,500 — that’s 79 percent off. You get to go down in one of those deep ocean vessels as part of a 13 day excursion. And that’s not all. They’ll throw in a DVD of Titanic, as well — just in case you weren’t sold.

When I say “New York Yankees” what smell, what aroma, comes to mind? Got it? (Red Sox fans, you can participate here).  I ask, because the Yankees are coming out with an official cologne. Billboards are on the way along with ads on the Number 4 subway that goes to Yankee Stadium, a train that already has its own distinctive scent.  The story in Advertising Age says the Yankees cologne is supposed to smell like “success.”