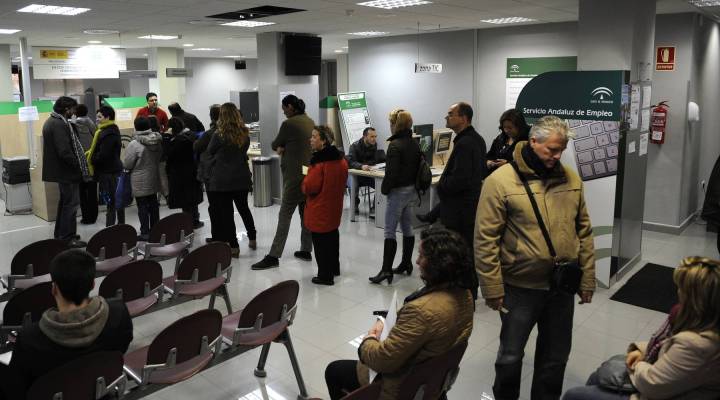 The international perspective on U.S. unemployment

People wait in line at a government employment office in the Cruz Roja suburb of Sevilla on January 27, 2012. What do people in Europe think of the unemployment situation here in the U.S.? CRISTINA QUICLER/AFP/Getty Images
BBC World Service

The international perspective on U.S. unemployment

People wait in line at a government employment office in the Cruz Roja suburb of Sevilla on January 27, 2012. What do people in Europe think of the unemployment situation here in the U.S.? CRISTINA QUICLER/AFP/Getty Images

Stacey Vanek Smith: A bit later this morning, we get U.S. unemployment numbers for February. Last month, they were encouraging — the jobless rate was 8.3 percent. And we’re not the only ones watching the number this morning.

And now for the global perspective on business and economics — and us, we turn to Andrew Walker, the BBC’s economics correspondent. Good morning, Andrew.

Smith: So, today’s jobs report will give us an update on the unemployment rate; currently 8.3 percent of Americans are unemployed. Tell us, if you will, how the U.S. compares to the rest of the world.

Walker: The U.S. is actually very close to the average for developed economies — that’s the members of the Organization for Economic Cooperation and Development. The most recent figure for the unemployment rate overall — December last year — is 8.2 percent.

There’s quite a lot of variation around that average, though, of course. South Korea: 3.1 percent, that’s the lowest; Japan, a little bit more than that. And the worst in this group of countries is Spain, where it’s flirting with a level of 23 percent.

Smith: Here in the U.S., we have come to feel like our economic recovery’s stuck in neutral a little bit. Gas prices have started to scare people. How is does the rest of the world see the U.S. economy right now?

Walker: Well, in financial markets, and among business communities, I think there’s a degree of relief that there have been some signs of slightly stronger life in the U.S. recovery in the last few months.

I think I have to say, for the guy or the woman on the street in Europe, they would love to have a recovery like the U.S. has got at the moment, because if you look at what happened at the end of last year — the eurozone economy in particular contracted significantly.

There was a little bit of an acceleration in growth in the United States, and I think Europeans would love to share that experience if only they could.