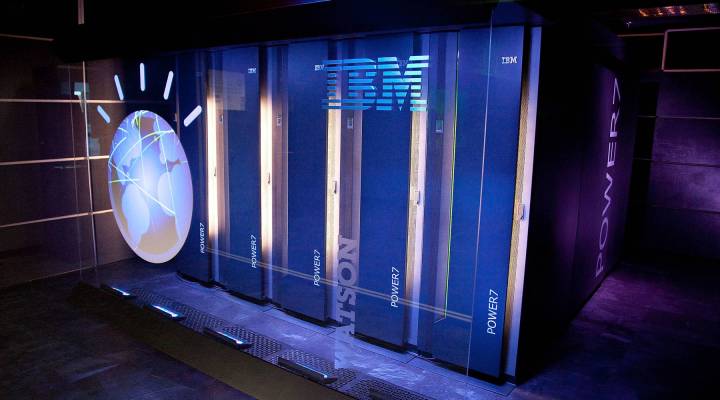 A general view of IBM's 'Watson' computing system at a press conference to discuss the Man vs. Machine"Jeopardy!" competition at the IBM T.J. Watson Research Center in Yorktown Heights, N.Y. The supercomputer conquered “Jeopardy!” Then he got a job analyzing health records. Now, he may suit up for Citigroup. Ben Hider/Getty Images

A general view of IBM's 'Watson' computing system at a press conference to discuss the Man vs. Machine"Jeopardy!" competition at the IBM T.J. Watson Research Center in Yorktown Heights, N.Y. The supercomputer conquered “Jeopardy!” Then he got a job analyzing health records. Now, he may suit up for Citigroup. Ben Hider/Getty Images

Kai Ryssdal: I don’t know if you remember this, but last year there was kind of an interesting series on the television game show “Jeopardy!” Watson, the computer developed by IBM, took on “Jeopardy!” champions in a special three-day smart-off. Watson won, by a lot. And then things started getting interesting. Watson started getting job offers. The first were in health care. But how he, it, looks to be heading to Wall Street. Citigroup has signed Watson up to see if she, it, can improve customer service and risk management.

Stacey Vanek Smith: Watson can read 200 million pages in three seconds. But how can reading really fast help Citigroup? I put that question to IBM’s Manoj Saxena. Here’s his sales pitch for the supercomputer:

Manoj Saxena: Imagine if your company had the answers to all the questions that your employees and your customers may have.

That’s some big talk, but Saxena says he can back it up. Watson can crunch data from sources ranging from earnings reports to blogs to customer comments — and use them to answer questions like: What’s the credit card for me?

Saxena: Watson is the beginning of a new class of computers that understand human language and provide suggestions and recommendations.

Equity analyst Ed McGuire with CLSA estimates in just a few years, Watson’s could generate bring in $2.5 billion of renvenue for IBM.

Ed McGuire: To manage risk and help companies go after the decisions that require enormous amounts of data — it’s a pretty attractive opportunity.

Stephen Baker: Watson’s genius is that it can answer anything, but only at certain levels of confidence.

Baker says Watson’s answers are educated guesses based on probabilities. So caution could be in order, especially if banks start using Watson for things like risk assessment. And if “Jeopardy!’s” Daily Double is any indication, Watson has an appetite for risk.

Alex Trebek: Now Watson, although you have but $400, you know of course that you can risk up to the maximum value of a clue on the board and that is $1,000.