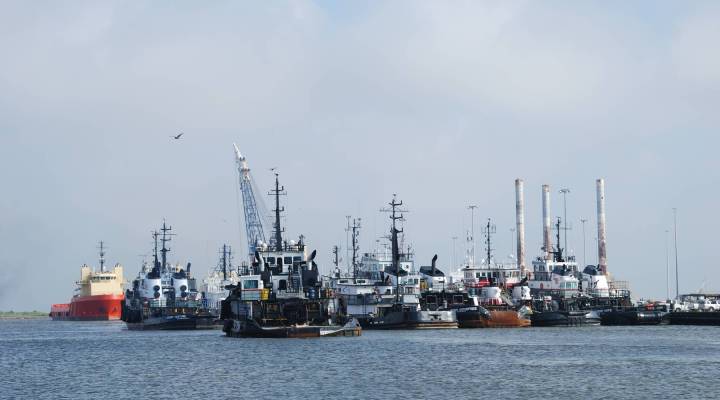 COPY
Ships which have been docked for months after a moratorium on deepwater drilling was imposed in the wake of the BP oil spill are seen in Port Fourchon, La. on April 8, 2011. MIRA OBERMAN/AFP/Getty Images
Mid-day Update

Ships which have been docked for months after a moratorium on deepwater drilling was imposed in the wake of the BP oil spill are seen in Port Fourchon, La. on April 8, 2011. MIRA OBERMAN/AFP/Getty Images
Listen Now

Here in the U.S., a prediction of 7.5 percent economic growth would have economists bouncing off the walls. But in China – today’s announcement by premier Wen Jiabao that growth would be only 7.5 percent this year is seen as a disappointment. It’s the first time since 2005 that the growth goal has fallen below 8 percent — a number that’s considered critical for keeping the Chinese population happy.

Apple says more than 25 billion apps have been downloaded from its app store. For some reason that still seems less impressive than McDonald’s serving billions of hamburgers.

And from the Marketplace “it could always be worse” file: BP is expecting to pay out at least $7.8 billion to settle with victims of its massive oil spill in the Gulf of Mexico. But investors seem to love that idea. BP’s shares are trading near two-year highs in London today, up more than 1.5 percent on the settlement news. Apparently it was a better outcome than the markets were expecting.

Maybe Steinway can play some sweeter music, when it reports earnings later today.

Clean your room, clean your room — I don’t know about you, but I seem to recall that’s all I ever heard growing up. For those of us who never listened to mom’s nagging, here’s what we might have missed. A teenager in Scotland finally gave in to weeks of badgering from his parents. And as he picked up his mess, he discovered … a pile of old lottery tickets. Long story short: he’d been sitting on a winning number for nearly a month. And the jackpot amounted to

Roughly $84,000. Dad’s suggestion now? Maybe his 19-year-old son can finally afford … to move out. Or, I might add…at least hire a housekeeper.

To those  little square bar codes that companies want you to scan with your smart phone to learn more about products. They’re called QR codes… and the tech savvy people at Mashable.com have put together a list of some of the most ridiculous ones: a small plane with a banner ad trailing behind it…No words… just a QR code. Another is a cereal box with a code that you’re supposed to scan every hour for a different video. Or my favorite: a gravestone in Europe… With the name of the deceased… And a QR code in case you want to learn more about her.