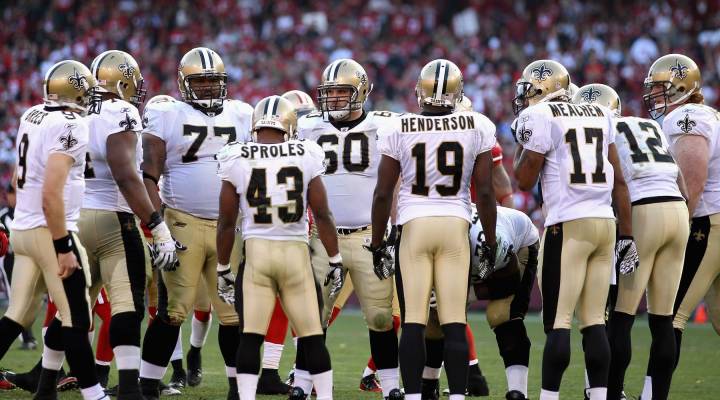 The New Orleans Saints huddle on the field against the San Francisco 49ers during the NFC Divisional playoff game on January 14, 2012 in San Francisco, Calif. The team is in the limelight because of a bounty scandal. Jed Jacobsohn/Getty Images

The New Orleans Saints huddle on the field against the San Francisco 49ers during the NFC Divisional playoff game on January 14, 2012 in San Francisco, Calif. The team is in the limelight because of a bounty scandal. Jed Jacobsohn/Getty Images

Stacey Vanek Smith: For getting someone carted off the field, New Orleans Saints players were apparently paid a thousand dollars.  Knocking a player out of the game? $1500.

Andy Zimbalist: These are the players who want more recognition, the player who’s still trying to make it who’s going to be more susceptible to this kind of environment.

The punishment from the NFL could involve hefty fines and suspensions, but the fallout from the bounty scandal could backfire in other ways says sports analyst Matt Powell. He says endorsements and merchandise sales rely heavily on fans feeling good about a team.

Matt Powell: And this may move fan sentiment in the opposite direction. So this could end up hurting some teams in the pocketbook in terms of licensed product sales and maybe even ticket sales.

Powell says football fans usually don’t mind a little unnecessary roughness, but this scandal may have crossed the line.