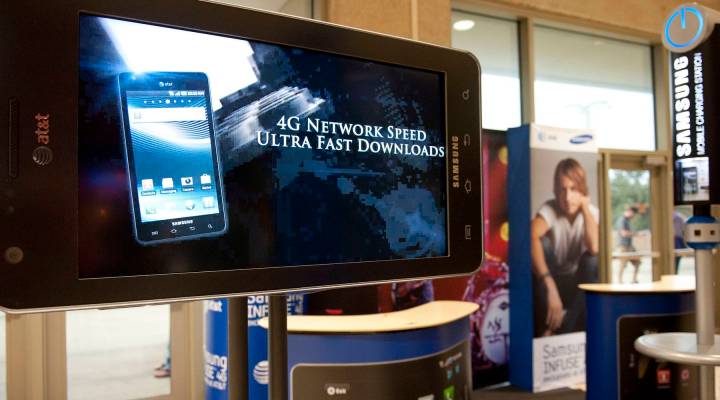 COPY
Infuse 4G Demo Area at an AT&T and Samsung's presentaion on June 16, 2011 in Biloxi, Miss. AT&T customers who have been used to unlimited data may be in for a shock. Erika Goldring/Getty Images for AT&T & Samsung
Mid-day Update

Infuse 4G Demo Area at an AT&T and Samsung's presentaion on June 16, 2011 in Biloxi, Miss. AT&T customers who have been used to unlimited data may be in for a shock. Erika Goldring/Getty Images for AT&T & Samsung
Listen Now

The price of crude oil fell slightly this morning, to around $125 a barrel in global trading. Yesterday, a report of a pipeline explosion in Saudi Arabia sent oil prices up near a four-year high. The Saudis denied that report, but two things are clear: Oil traders are on edge, and prices are very high.

Today we say goodbye to Continental Airlines. The last Continental flight will take off tonight, as United and Continental complete their merger.

The auto industry reports sales in the U.S. are at their highest level in 4 years… February sales were better than anyone expected.

The leaders of 25 European countries signed a new treaty to force euro countries to keep their deficits under control.

Sorry to break the news, but it’s the end of the line for truly unlimited data on your AT&T phone — even for the folks who were grandfathered in.

Here in the Marketplace office this morning, we counted 14 one-dollar bills among us, and zero one-dollar coins. That’s something Republican Sen. John McCain and Democratic Sen. Tom Harkin would like to change. They want to replace the dollar bill with a dollar coin and they’ve introduced some legislation — a bill if you will — to do that. They say it would save around $200 million a year. Tell us which you prefer – bills or coins.

In Japan, there are kitty cafes, where customers pay about $12 an hour to go out on the town and play with cats. But a new animal protection law will require the cafes close at 8 p.m., which means “kitty-last-call” just got moved up. Reuters reports it’ll mean less cat-petting for folks who stop by after work — a cat prohibition of sorts. And we wonder, perhaps, the rise of kitty-themed speakeasies?

Coming soon to Beverly Hills, Calif.: A cupcake vending machine. According to the Los Angeles Times, the pink machine will dispense freshly-baked cupcakes from Sprinkles bakery.  I’m imagining a smooshed cupcake when it drops to the vending machine tray. I hope it doesn’t work like that.