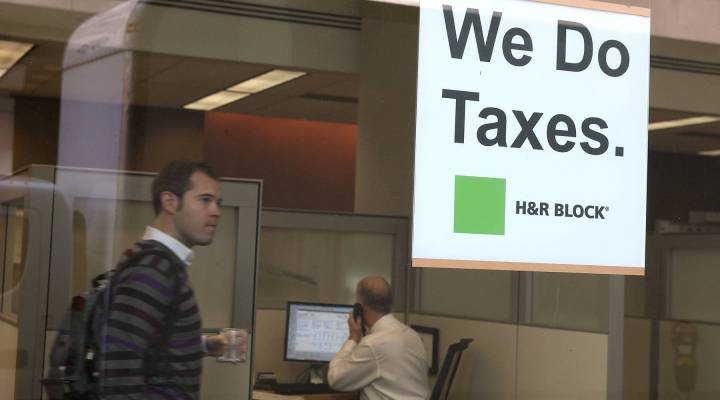 A customer walks through an H & R Block office on April 15, 2011 in San Francisco, Calif. The Obama administration hopes to reform the corporate tax system in the U.S. Justin Sullivan/Getty Images
Listen Now

The Obama administration is expected to announce a plan to cut the federal corporate tax from 35 percent — that’s the second highest rate in the world — down to 28 percent. The plan calls for the elimination of corporate tax loopholes, which keep many big firms from paying the top rate.

New housing data shows existing home sales are at a one and a half year high, and the number of homes on the market is as low as its been in 7 years.

Despite yesterday’s announcement that Greece will get more bailout money and avoid a messy default next month there’s bad news for Greece this morning. It’s credit rating has been downgraded to a C by Fitch, which means a default is highly likely.

That’s after the European service sector shrunk unexpectedly this month, leading to fears the economy may be sliding into recession. In Greece today, lawmakers are pushing though another round of cuts to meet terms of the latest bail out deal.

Looking for work? NASA is in the market for some good eaters. The agency wants to figure out how it would feed astronauts on any future mission to Mars, so it needs people to try to cook and eat astronaut food for four long months.