I’ve put together so much furniture from IKEA, that I’ve actually had the thought of being one of those guys that helps other people assemble their dressers, chairs, and bookcases. The thing that always stops me is that, if you factor the time it will take me to disassemble that MALM bed because I put one of the baseboards on backwards, I’m really not very good at putting IKEA furniture together. Perhaps help is on the way. IKEA is rolling out a series of how-to assembly videos to replace/compliment its sometimes-confusing, wordless paper instructions. No speaking in the videos, so they’re cross-cultural, and you get to listen to some upbeat piano music.

The MALM makers in this video finish the job in four and a half minutes. Good time, indeed. I think I missed the part where they get in an argument over who’s supposed to be pounding in the wooden dowels and who’s supposed to be reading the instructions. And I don’t think they quite captured the I’m-so-frustrated-I’m-going-to-take-a-two-hour-nap part of the assembly. Maybe I need to watch it again. 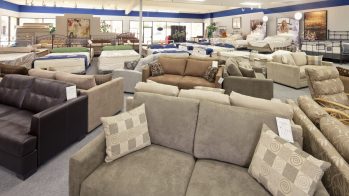 Americans are buying a whole lot of furniture