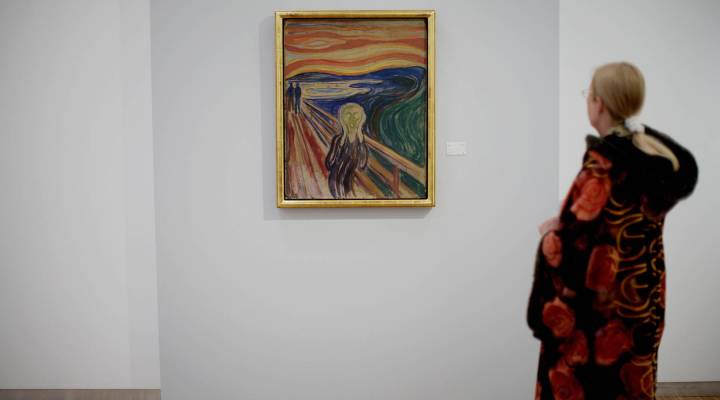 PODCAST: Live from Michigan, day one

COPY
'The Scream' by expressionist painter Edvard Munch is on display for the public on May 23, 2008 at the Munch Museum in Oslo. The painting is set to go on sale next year. Solum, Stian Lysberg/AFP/Getty Images
Mid-day Update

PODCAST: Live from Michigan, day one

'The Scream' by expressionist painter Edvard Munch is on display for the public on May 23, 2008 at the Munch Museum in Oslo. The painting is set to go on sale next year. Solum, Stian Lysberg/AFP/Getty Images
Listen Now

After marathon negotiations, European Countries and the International Monetary Fund have agreed to give Greece a fresh $170 billion bailout. In exchange, Greece will make deep budget cuts and the holders of Greek bonds will accept significant losses on their investments.

Wal-Mart says its profits dropped 15 percent last quarter. The company says that’s because of how deeply it had to cut prices to lure consumers.

We got word today that one of four versions of “the Scream” will be sold at an art auction this Spring. Sotheby’s estimates it’ll sell for at least $80 million, enough to make you — yeah, I’m gonna say it — scream.

In Portugal today, which is another country with big debt problems that needed a bail out. The government had tried to cancel the traditional Fat Tuesday celebrations. The prime minister called for shared sacrifices and wouldn’t declare a national holiday. But workers took the day anyway. Most companies and public services shutdown, and street parades are expected to be packed.

To Tivoli, Texas, where a 7th grade class put a vocabulary lesson to use. According to The Victoria Advocate, “Boycott” was a vocab word in a recent history class. The students took the lesson to heart and decided to boycott the school cafeteria. The students wanted more choices — maybe some salads — so they brought their lunches from home, and didn’t spend any money on tater tots. All we want is a “chance at change”  said the 7th grade class president. Apparently the school listened and they boycott is off… At least for now. Next vocabulary lesson: compromise.