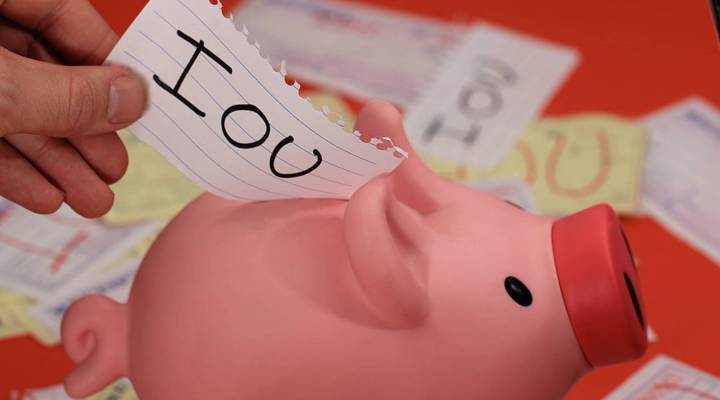 Buddy, why can’t we save a dime?

Buddy, why can’t we save a dime?

Tess Vigeland: I don’t know how budgeting works in your house, but safe to say it does not work like the federal government. If it did, you announce your budget proposal, then a spouse or partner submits theirs. The family cat would need to weigh in. And then you’d sit around taking Facebook photos of the cat sitting on your budget.

This week the White House rolled out its wish list — but pretty much everyone on the planet knows it won’t get by Republican opposition. Which bring us back to our budgets. Monday marks the start of America Saves Week, brought to you by the Consumer Federation of America. Why do we need a week dedicated to the subject?

Sheldon Garon‘s new book is “Beyond Our Means: Why America Spends While the World Saves.” Welcome to the program.

Sheldon Garon: Thank you nice to be on.

Vigeland: So let me just ask you to tell us in your own words your own answer to the question about why Americans spend while the world saves.

Garon: Basically, two things: One is that historically and up to the present, the United States has not been particularly active in promoting what’s called “small saving,” the accessibility of ordinary people with fairly small deposits and small balances to take their money to a savings bank or a post office savings bank, such as you see in a lot of the rest of the first world. So inaccessibility to savings institutions is one problem, particularly for lower-income people.

But a second problem is that the United States has in recent decades has been exceedingly generous in offering cheap credit to their people.

Vigeland: Let’s get to the credit issue in a moment.

Vigeland: Then let’s contrast what’s happened in this country to some other countries that are far better savers than we are. You talk a lot in the book about Germany, Japan, Singapore — all with very strong cultures of saving.

Garon: They have very long modern histories of these very friendly small-savers institutions. In the 1800s, the main institution in our country was the Savings Bank, which unlike commercial banks, took very small deposits, very small minimum balances. But we were different from the Europeans and the Japanese in one major respect: These institutions for small savers — Savings Bank, things like that — while they were quite dense and popular in the East Coast and the Northeast, they didn’t spread that much some of the cities in the Upper Midwest and the Pacific Coast. Most people, as late as 1910, did not have a bank that they could have a savings account in.

Vigeland: Why did they not spread?

Garon: From about the middle of the 1800s, Europeans and then Japanese set up these things called “postal savings banks.” In other words, you could start a small-savers account at your local post office, anywhere in the country. The United States, we resisted that trend all through the rest of the 1800s. Finally in 1910, Congress passed a very tepid version. It was crippled from the start; it offered low market interest rates, it wasn’t that accessible. But if you ask why: Well, commercial banks were very strong in the Untied States from a fairly early point. And they vigorously opposed congressional efforts to start a postal savings bank, because it would offer competition.

Vigeland: If we started out as a nation of savers, we certainly have not been one for quite a long time now. What was the catalyst for that. I know World War II was a big one.

Garon: World War II itself, we like all the other countries that were fighting, staged these huge savings campaigns. After the war, we remained pretty good savers, so the big break really comes in the 1980s, when financial deregulation really kicks in. First of all, it means that all of a sudden, we have a credit card industry that’s exceedingly profitable. It became possible for credit card companies after about 1980 to charge whatever they wanted in interest for unpaid balances. Another thing we did was the home equity loan. So by the time we get to the 1990s and early 2000s, Americans are borrowing like crazy.

Vigeland: There has been talk that the financial crisis shook us all to our core and that we will change our ways, become a nation of savers again. It looks like it’s starting to go back to what it was. What do you think about the future of savings?

Garon: I think it’s actually hard to predict. But in the wake of 2008, indeed Americans began to increase their savings rates, particularly those in the higher incomes that this tended to make the savings rate look fairly high. However, in the last few months, savings rates are noticeably declining again. And it also appears that we talked a lot about how Americans were spending so much in this really healthy in Christmastime or at least on Black Friday, the one day. Now we have the statistics that people were going into debt once again to do that. But it looks like we have not been transformed the way that many pundits said that we would be in 2008.

Vigeland: Sheldon Garon is the author of “Beyond Our Means: Why America Spends While the World Saves.” Thanks so much for coming in. It’s been fascinating.

Garon: Thank you very much Tess.