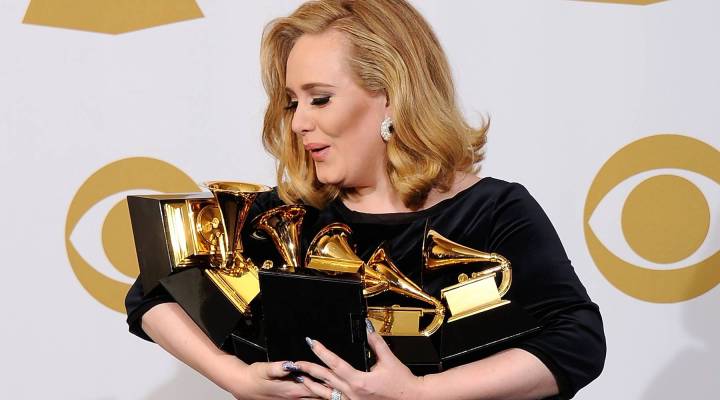 COPY
Singer Adele cleaned up at the 54th Annual GRAMMY Awards at Staples Center on February 12, 2012 in Los Angeles, Calif. Why can't we get enough of her tear-inducing songs? Kevork Djansezian/Getty Images
Mid-day Update

Singer Adele cleaned up at the 54th Annual GRAMMY Awards at Staples Center on February 12, 2012 in Los Angeles, Calif. Why can't we get enough of her tear-inducing songs? Kevork Djansezian/Getty Images
Listen Now

The focus is on Greece… Which approved a tough package of budget cuts yesterday. Now Germany and other European nations will have to decide if Greece has done enough to get more bailout money.

The stars are not lining up right for Japan, which said this morning its economy shrank more than 2 percent at the end of last year. That’s because of natural disasters, as well as the euro crisis, which is hurting Japan’s big money maker: exports.

In Washington today, President Obama will send his 2013 budget plan to Congress. It’s not likely to pass anytime soon, but gives voters an idea of the President’s tax and spending priorities this election year.

To the talk of the NBA: Jeremy Lin. He’s a 23 year old Harvard Graduate who has become an overnight star by leading the New York Knicks to victory again and again. The reaction from fans has been dubbed “Lin-sanity.” Well turns out Jeremy Lin’s old high school basketball coach bought up the website Linsanity.com two years ago. He’s now using it to sell Jeremy Lin t-shirts. Problem is, according to the New York Post, while he had the foresight to get the website going, he didn’t think to print the t-shirts. And now he’s got a bit of a back order problem.

Why does Adele make us so us sad and yet we like it so much? The British singer won six Grammy’s — last night — in part because of her ability to make us all a little weepy. The Wall Street Journal reports there’s good reason we keep hitting the play button. Music that makes us emotional — even makes us sad — causes our brains to reward us with dopamine. The more emotions, the more dopamine. And so we choose to listen — and get teary eyed — over and over and over..