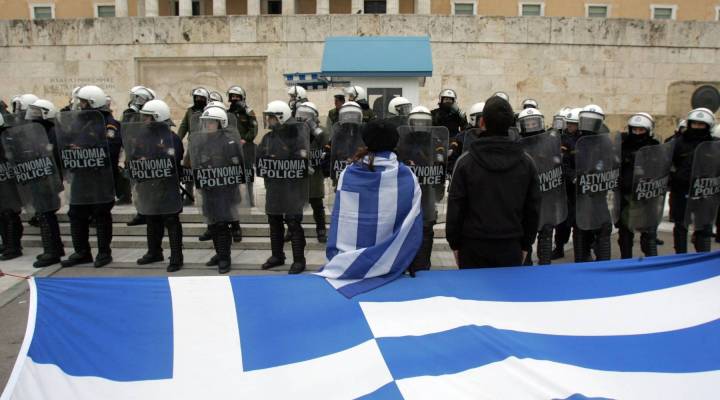 Europe, on a scale of 1 to 10 — 10 being financial cataclysm — is back up to a 6  this morning, despite Thursday’s hoopla when Greek politicians reached a deal to severely cut government spending, E.U. leaders went on to make it clear there would be no $173 billion bailout for Greece until the budget promises are put into force. The four words came from the Prime Minister of Luxembourg: “No disbursement without implementation.” A vote could come this weekend. Default therefore still looms for Greece and a exit from the European currency is an option.  Greece’s major labor unions kicked off a two day strike today.

There’s word Chinese exports fell half a percent in January. But even more striking is what happened to China’s imports down more than 15 percent. This morning there’s also word that the U.S. trade deficit with China soared to a record $295 billion in 2011.

Sales of everything to do with video games — NPD Group says they dropped 34 percent last month compared with a year ago.

In Washington, the House has followed the Senate in passing a ban on members of Congress buying and selling stock if they have access to private information about upcoming laws or government contracts.

The $25 billion settlement between states and those banks that botched the foreclosure process is supposed to help homeowners over time.  But right away, experts say there will be an ugly downside of the deal that has not been getting much attention.  As the settlement talks dragged on for more than a year, many banks slowed down the pace of foreclosures.  Now that the settlement’s done, expect a flood of evictions and heartache.  More foreclosures means other home prices could drop in the coming months.

What was it like in 1849 in one of those gold rush towns in the old West?  Williston, N.D. has its own version playing out in what you might call “3-D”  The oil rush in western part of the state continues to draw loads of new oil workers, who then find there’s no place to stay.  So folks have been living in their trucks in the Walmart parking lot in Williston — sometimes 50 at a time, making some shoppers nervous. Walmart allows brief RV camping in its lots. But the company put up yellow notices this week, giving the campers 24 hours to get out or get towed. The Bismarck Tribune quotes a Walmart official saying the company wants to be a good neighbor “during challenging times” but it’s just not appropriate to be living in the parking lot. Most official camp grounds are closed this time of year.

A Las Vegas-based clinic offers hormone treatment for men has plans to open up near the New York Stock Exchange.  The Financial Times reports the in-thing for beleaguered market players these days is testosterone injections.  The claim, at least is that it puts a pep in your step… on the dance floor and on the trading floor.

To Valentine’s Day: pizza Hut is offering a wedding proposal special, for $10,010. It comes with a ring, limousine service, a photographer, flowers, and fireworks. Which leaves about, oh, $10 left — for pizza and breadsticks.