David Brancaccio: You’re mood about the state of the economy has a lot to do with your politics. That’s the subject of our weekly Attitude Check.

Frank Newport is editor-in-chief at the polling firm Gallup. He joins us every Thursday. Good morning Frank.

Brancaccio: Now we all know that the national picture can obscure what’s going on closer to home. I wanted to ask, not about the grand American economy — not so grand these days, by the way — but about what’s happening in some of the states. I know you have some data on that. Where, for instance, are we doing the best? Where’s the economy stronger?

Newport: We ask Americans a couple of different questions every day, and we aggregated for all of last year: how confident are you in the economy? That’s consumer confidence. And we also said, for employed Americans: is your place of employment hiring or firing? That’s our job creation index.

And boy, that later one — the place you don’t want to be is Rhode Island. It had the lowest job creation index of any of the 50 states. The place to be… all those Rhode Islanders should move across country to North Dakota. We’ve heard a lot about it, but that is at the very top of the list.

Brancaccio: Now there are attitudes that we have toward the direction of the economy. But also, you could look more objectively at, for instance: where are jobs being created? Is it the same states? The same places where people are most optimistic are also the places that are doing well with job creation?

Newport: There is about — to be technical — a 0.52 correlation between the state’s rank in terms of job creation and its rank in terms of consumer confidence. And one of the reasons for that, we think, is politics.

We have states like New York, and Hawaii, and Maryland, where the job market’s not all that great, and yet the people who live in that state have fairly high levels of consumer confidence on a relative basis. Those are reliably blue states; there’s a Democrat in the White House, President Obama. And we think when these people talk about the economy, they think politics, and say: Yeah, things are getting better — simply because they’re more likely to be Democrat. 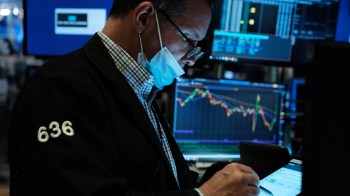