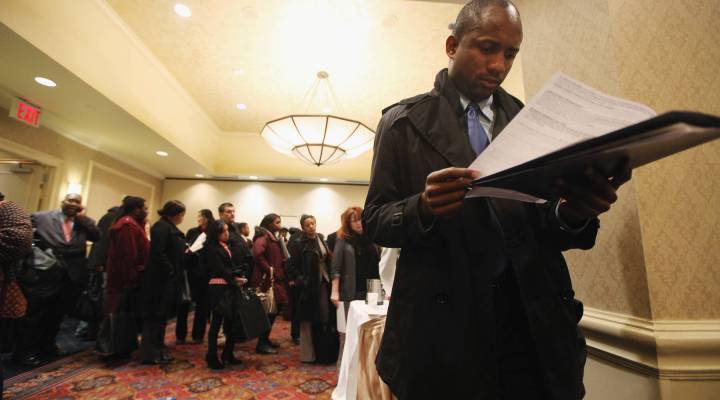 Tess Vigeland: A three-year low. Now that’s something to celebrate, isn’t it? It is when you’re talking about unemployment in this country. Pretty much any economist will tell you that there cannot be an economic recovery without recovery in the job market. If you don’t have a job, you’re not going to spend money. So yes, the addition of nearly a quarter of a million jobs to company payrolls last month is party-worthy.

But just how big of a party? To help us answer that question we turn to economist Chris Low of FTN Financial. He’s a regular guest on the Marketplace Morning Report every Friday, and we’re borrowing him today. Chris, thanks for joining us!

Vigeland: So there was quite a bit of hoopin’ and hollerin’ about this number when it came out. But one wonders if perhaps it should maybe have only been hoopin’.

Low: Well, look, we haven’t had a really good jobs number in a while. There was a stretch of three months from February to April last year and then after that of course, we had that terrible soft patch where everyone was worried about recession. And it’s been a slow crawl out since that. So all of a sudden 200,000-plus numbers in a row, economists were expecting a pull back and instead we had an acceleration. Maybe a little bit of euphoria is OK.

Vigeland: OK. Well, we’ll take that. For the folks who are still out there pounding the pavement, looking for work, what do they take out of this report in terms of perhaps industries that are hiring more than others. Where is the real silver lining here?

Low: Well and that’s what I liked about the report more than just about anything is that it was a really broad-based gain in the private sector this month. We saw 50,000 new manufacturing jobs, which is the strongest in a long time. 21,000 new construction jobs. There was hiring in health care, that’s been strong for years, but that continues to be a leader. Not all that many temps, but there were some there as well. We actually like to see permanent hires rather than temporary hires, so that’s OK. Business services was strong as well. And then retail was decent, and that’s a really good sign when you see that in the first quarter, because particularly this year, there was more retail hiring in the fourth quarter for Christmas than there has been in the last couple of years. That was one of the areas where we expected a pull back.

Vigeland: You mentioned constriction. Is it possible to say because that is getting a boost in jobs that that says something about where we are with housing?

Low: Well, maybe a tiny bit. Housing is still in really big trouble, at least from a builder’s standpoint, because prices are failing. And in most of the U.S., can you buy a house for less than it cost to build, which means nobody’s going to build one. Where we are seeing strength in construction, we’re beginning to see a recovery in the commercial side. There hasn’t been an office building or a hotel started in the U.S. in about three years. And we’re starting to see vacancy rates fall, and because it takes a few years from start to finish on those projects, that’s a place where hiring is picking up and it’s only going to get better.

Vigeland: All right. Well, so to sum up this report from January, is it possible to tell people how they’re supposed to feel at this point? Because as you know, it’s all psychological — how we’re feeling, that kinda determines whether we’re going to go out and spend money. Can you give us an idea of what we’re supposed to think at this point?

Low: Well, absolutely. Look, you know, perspective, right? There are still millions of people who have been out of work for more than six months and hiring of a couple hundred thousand, well, it looks good by recent standards is not gonna pull them back into the work force right away. So from that sense, there’s still that worry. But we had almost 3 percent growth in the fourth quarter, we have hiring that is consistent with that going forward. If it continues then, I think the right way to look at this as if it can be sustained, we will be in a better mood next month and again the month after that. And that certainly a big improvement over the sort of growing pessimism we felt from last spring right through the winter.

Vigeland: All right. Chris Low, chief economist with FTN Financial in New York. Thanks so much.