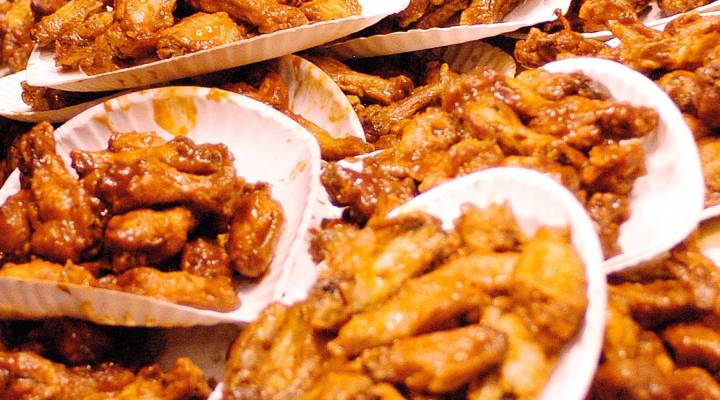 COPY
Did you get your share? Jeff Fusco/Getty Images
Mid-day Update

Did you get your share? Jeff Fusco/Getty Images
Listen Now

The economy adds 243,000 jobs in January and the unemployment rate falls to 8.3 percent. The Labor Department’s monthly job numbers are good — better than almost anyone expected. Manufacturing added jobs. Construction and retail too.

To a supermarket in the U.K. called Sainsbury’s which sold a product called Tiger Bread. The crust of the bread looks sort of like the side of a tiger. Well, actually, as a 3-year-old girl named Lily Robinson wrote in a letter to Sainsbury’s it should be called giraffe bread because it looks more like a giraffe. Sainsbury’s agreed with little Lily. And now, all across the U.K., it’s called Giraffe Bread.

The Super Bowl is the 2nd biggest eating day after Thanksgiving. And a big part of the spread — chicken wings. Bloomberg reports wing prices are at an all time high. Wholesale prices in Georgia, the largest chicken state, are up 52 percent. But that doesn’t seem to be slowing most of us down as we make plans for Sunday. The National Chicken Council says American’s will eat 1.25 billion chicken wings during the Super Bowl. That’s wings enough to circle the earth twice — and about a hundred billion calories.