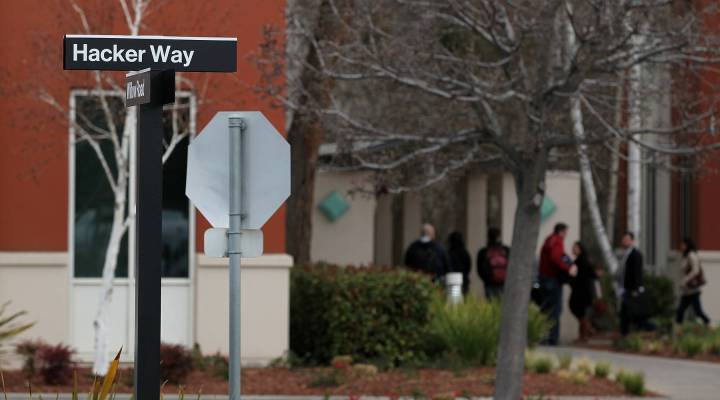 A street sign for 'Hacker Way' is stands at the Facebook headquarters on Feb. 1, 2012 in Menlo Park, Calif. Will Facebook's company culture change once it goes public? Justin Sullivan/Getty Images

A street sign for 'Hacker Way' is stands at the Facebook headquarters on Feb. 1, 2012 in Menlo Park, Calif. Will Facebook's company culture change once it goes public? Justin Sullivan/Getty Images

Tess Vigeland: OK, I think we’ve all had enough with the bad headline puns about Facebook’s announcement of a pending initial public offering. But the numbers getting bandied about are staggering: 845 million active users a month; $3.9 billion in cash in the bank. Promises of more billions of dollars to employees, early investors, hangers-on — you name it.

Yesterday’s public filing also outlined several challenges the company faces as it goes public — including its ability to hang on as the king of social media, regulatory challenges. And here’s one that stood out to us: A letter from founder Mark Zuckerberg about how Facebook has to continue to operate under “the Hacker Way.”

Larry Dignan is editor in chief at ZDNet, and his column today talks about Facebook’s culture. Thanks for joining us.

Vigeland: You write in your column that Mark Zuckerberg’s real challenge is going to be sticking with “the Hacker Way.” Talk to us about what that means.

Vigeland: And how does he foster that right now?

Dignan: Right now, they have open, I guess you call them “hackathons,” so to speak, where everybody with an idea comes out and does their demos and plays with code. And basically, they have thousands of versions of Facebook running around the company. So it feels like a very startup culture.

Vigeland: So then I guess the question really is whether going public is going to mean that that culture changes. You know, if you have a bunch of people wanting to take a risk, but at the same time, they’re keeping one eye on the share price, what happens there?

Dignan: I think it’s inevitable to culture changes. You saw with Google, you can only get so big before you start losing some nimbleness, so to speak. And you know, the larger you get, the more you need processes and all these other things that go with being a public company, Sarbanes–Oxley. So all that stuff is kind of a buzzkill compared to “the Hacker Way.” I think Facebook — like other companies, I mean, Microsoft is decidedly different today than it was when it was young — I think it’s a natural evolution that you have to go through. And I think it’s inevitable Facebook’s going to struggle with that.

Vigeland: And can you briefly describe for us how Google struggled with that? Because they’re kind of the most recent example of this that we have.

Dignan: Right. Well when Larry Page took over, which was earlier — just a few months ago, really — from Eric Schmidt, one thing he did was he started killing projects. Because one of the things that makes Google great is they just kind of experiment, repeatedly. And he basically shut down a few things; they had clean energy investments, they had all sorts of things going on there. So you know, it’s about focus, right? And companies struggle with that because when you’re a public company, you’re always looking for more growth. So at some point, that takes you to different directions, and then you just wind up like a big octopus and you’re kind of flailing around. I think Google’s struggling a little bit now because they’re much bigger than they used to be, and I just think that’s inevitable, whether you’re talking General Electric, Microsoft, Google, Cisco. You know, being big is complicated.

Vigeland: Larry Dignan is the chief editor at ZDNet. Thanks so much for being with us.

Dignan: Thanks a lot.